Britain’s government has to give most its surplus vaccine supply to COVAX, the U.N.-backed program to supply poorer countries with shots. 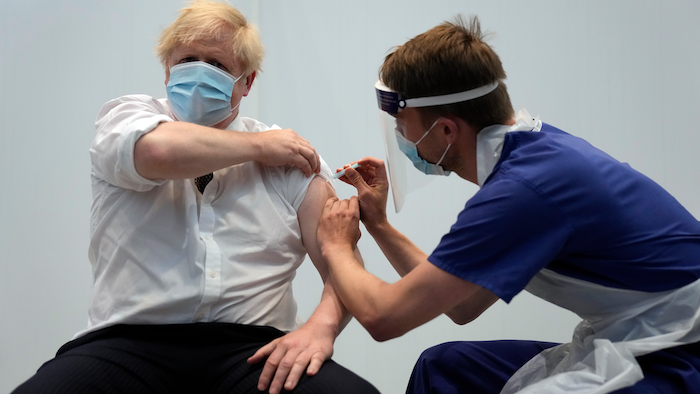 LONDON (AP) — British Prime Minister Boris Johnson will use the Group of Seven wealthy democracies’ summit next week to urge world leaders to commit to vaccinating the global population by the end of 2022.

Johnson is expected to stress the importance of a global vaccination drive when he meets with fellow world leaders on Friday in Cornwall, on England's southwestern coast, for the first face-to-face G-7 summit since the pandemic hit.

“The world is looking to us to rise to the greatest challenge of the postwar era: defeating COVID and leading a global recovery driven by our shared values,” he said in a statement Sunday. “Vaccinating the world by the end of next year would be the single greatest feat in medical history.”

U.S. President Joe Boden and the leaders of Canada, France, Italy and Japan will arrive in Cornwall from Friday for three days of talks focusing on the global recovery from the pandemic.

Britain’s government pledged in February to give most of the country’s surplus vaccine supply to COVAX, the U.N.-backed program aiming to supply poorer countries with jabs.

But the U.K. hasn't yet put a figure on how many doses it will donate. The country, with a population of about 70 million people, has ordered around 400 million doses of vaccines. Health Secretary Matt Hancock has said that the U.K. doesn't have any excess doses at the moment and that “we’re just getting them into arms as quickly as possible.”

The Sunday Times reported that Johnson is set to announce at the summit that the U.K. will pledge to donate over 2 billion pounds’ worth of jabs this year, with further donations in 2022.

The U.S. has said it plans to share 80 million doses of its surplus vaccine globally by the end of June, most of them through COVAX.