It's the first in a wave of shops in London that will use its automated checkout technology. 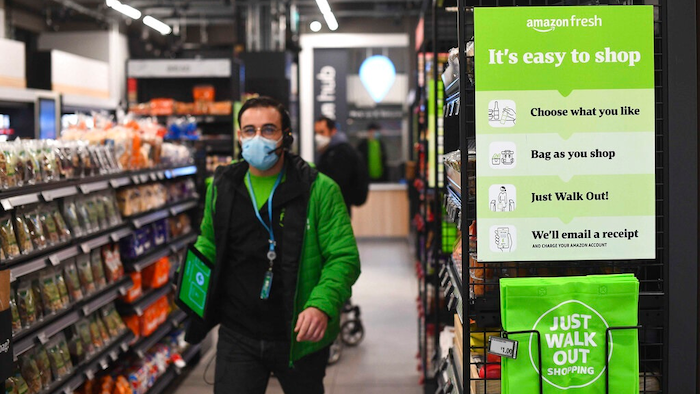 The Amazon Fresh grocery store opens in London, Thursday March 4, 2021, where a sign explains for shoppers to pick up items and walk out of the store, contactless, without the need for a till. Customers will scan a QR code on their way into the store, with cameras and technology identifying the items that shoppers take from the shelves and their account automatically paid.
Victoria Jones/PA via AP

LONDON (AP) — Amazon has opened a cashier-free supermarket in London, its first bricks and mortar expansion outside the U.S. as the company bets on strong demand for its contactless shops.

The online retailing giant opened the doors to its Amazon Fresh shop in West London's Ealing neighborhood on Thursday, in what it said will be the first in a wave of shops in the British capital using its automated checkout technology.

Shoppers use a smartphone app to scan a QR code so they can enter the store. They can fill their shopping bags with milk, eggs or other groceries while cameras and sensors track what’s taken off shelves.

Purchases are charged to an Amazon account after leaving and a receipt sent by email. There's no need to wait in line to pay at the checkout, a feature that has more appeal after the pandemic highlighted the need for social distancing.