Unions say the USDA's policy of allowing companies to slaughter birds faster endangers workers and makes it harder to protect against COVID-19. 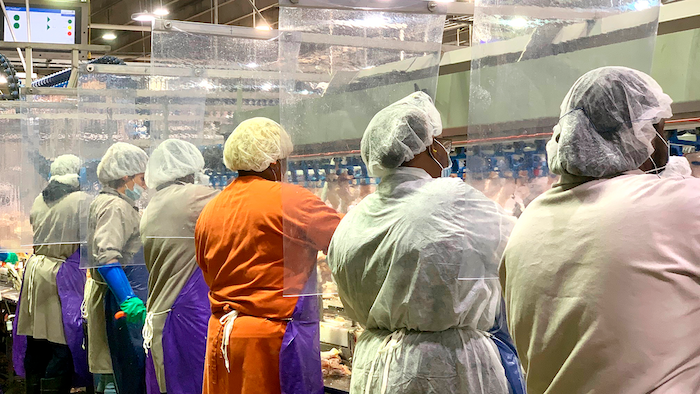 WEST DES MOINES, Iowa (AP) — The union representing workers at chicken processing plants in six states sued the U.S. Department of Agriculture on Tuesday, saying its policy of allowing companies to slaughter birds more quickly endangers workers and makes it more difficult to protect against spread of the coronavirus.

The USDA first allowed line speed waivers in 2018 after the National Chicken Council, a poultry industry trade group, petitioned it to increase speeds.

The lawsuit alleges that the waivers violate the Administrative Procedure Act because USDA failed to provide public notice or allow public comment and should be set aside.

“America’s poultry workers have been on the front lines of this pandemic since day one, putting themselves in harm’s way to make sure our families have the food we need during this crisis,” said UFCW International President Marc Perrone. “As COVID-19 continues to infect thousands of meatpacking workers, it is stunning that USDA is further endangering these workers by allowing poultry companies to increase line speeds to dangerous new levels that increase the risk of injury and make social distancing next to impossible."

The lawsuit claims the USDA has allowed 53 of 124 chicken processing plants to process up to 175 birds per minute instead of capping production at 140 birds as specified in regulations adopted in 2014.

A spokeswoman for the USDA’s Food Safety and Inspection Service said the agency does not comment on pending litigation.

Representatives of meat processing companies Tyson and Wayne Farms, which are mentioned in the lawsuit, did not immediately respond to messages seeking comment.

National Chicken Council spokesman Tom Super said the safety of line speeds of up to 175 birds per minute has been studied for 25 years since the first pilot projects were launched during the Clinton administration.

“The modernized system has been studied, debated, prevailed in court cases, and has been reviewed in depth for more than two decades to assure its effectiveness in further modernizing chicken inspection while improving food safety and protecting workers,” he said.

The local unions joining the lawsuit represent workers at chicken processing plants that have received waivers to speed up processing. The unions said in court documents that an average of eight workers per year died on the job between 2013 and 2017 in poultry processing plants, and that workers commonly suffer sprains, lacerations, and contusions. They contend that research and worker experience shows work speed is a major contributing factor to the high injury rates suffered by poultry workers.

Super said the rate of injury in poultry processing has fallen in recent years. The most recent Department of Labor’s Bureau of Labor Statistics data shows the recordable poultry processing illness and injury rate for 2018 was 3.5 cases per 100 full-time workers per year, down from 3.8 in 2017.

The lawsuit asks the court to find that the waiver program was adopted without proper procedure required by law, declare the waiver program arbitrary, capricious, and contrary to law and set it aside. Award costs and expenses, including reasonable attorney’s fees and expert witness fees.