The state will soon launch a competitive bidding process to try to get even more protective masks at lower prices. 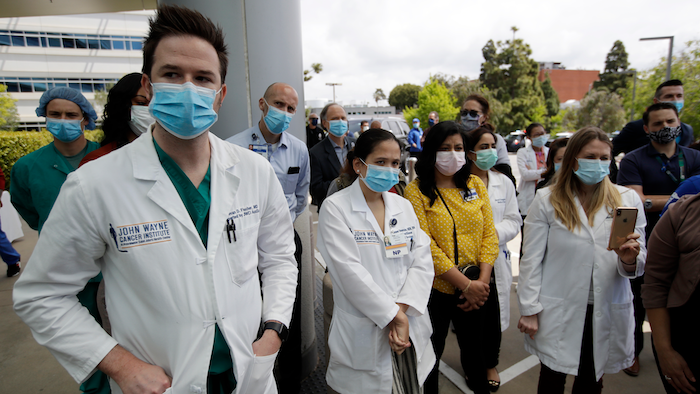 The state will soon launch a competitive bidding process to try to get even more protective masks at lower prices and is encouraging manufacturers within the state to make equipment, Newsom said.

“We decided to think outside the box, we did something big and bold," he said during a news conference at a Sacramento warehouse where masks and other protective equipment are stored.

But as he promoted California's efforts, he acknowledged the equipment isn't always getting to the workers who need it, something he blamed on hospital systems and local governments. The administration will be “more aggressive” in making sure masks reach front -line workers, Newsom said.

“We’re sending out an unprecedented number of masks. I want to make sure those masks are going to our front line workers," Newsom said, after sharing that the president of the National Union of Health Care Workers, Sal Rosselli, told him some health workers were getting only two to three N95 masks per week. The California Nurses Association wants nurses to get a new N95 mask for every patient.

“We have got to address that issue and I want folks to know we're not naive to that challenge and that responsibility," Newsom said.

Brian Ferguson, a spokesman for the Governor’s Office of Emergency Services, could not immediately provide more details on what the state will do to improve distribution to workers.

Carmela Coyle, president of the California Hospital Association, challenged Newsom's comments suggesting hospitals are not appropriately distributing equipment to workers. Hospitals can only access the state supply of protective equipment through local and regional coordinators and only when the hospital is dangerously low on gear, she said. Hospitals distribute gear based on guidelines from the U.S. Centers for Disease Control and Prevention, she said.

“The governor's comments today suggested a new and different standard," she said.

The state has shipped 86.4 million N95 masks and nearly 300 million surgical masks, according to the administration. Those masks have gone to hospital workers, first responders, farm and factory workers, and nursing home employees. The state also has given away 17 million surgical masks to other states, including Nevada, Arizona, Oregon and Alaska, Newsom said.

The Federal Emergency Management Agency, which Newsom praised as a “spectacular" partner, provided tens of millions of masks for sale to hospitals and others in need of them, he said.

The state gives masks to county emergency offices and medical coordinators as well as to associations that represent certain industries of essential workers, such as dentists or grocery workers, Ferguson said. Counties submit requests to the state for equipment as they need it and then distribute it to hospitals.

“We can have a steady flow of all the PPE that the contracts provide, but if the employers aren't actually giving the nurses the masks that they need ... then it doesn't matter how much supply that we get," she said.

The deal with BYD was California's most high-profile deal for protective equipment since the pandemic began. Newsom announced the deal for 200 million masks per month in mid-April, but twice the first shipment of N95 masks failed to meet a deadline for federal certification.

BYD refunded California about a quarter-billion dollars at one point before the masks earned federal approval in June and began shipping.

California paid $3.30 per mask for N95s and 55 cents per surgical mask under the old contract. The new extension is $2.13 and 20 cents, respectively.

The state also has entered into multiple other contracts for protective equipment, including more masks, gowns, gloves and safety goggles.