The move could divert money expected to go to victims' families. 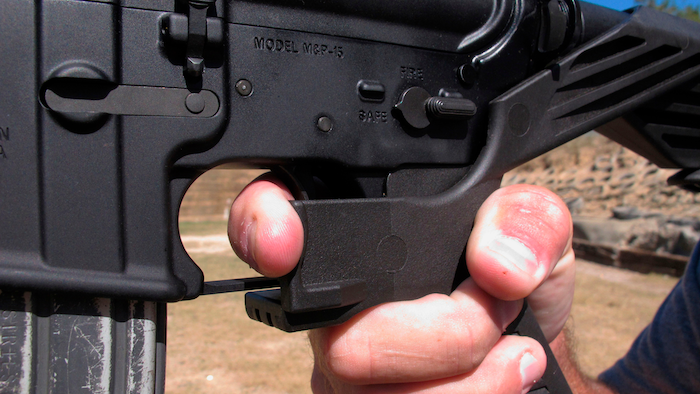 An AR-15 rifle fitted with a "bump stock."
Associated Press

LAS VEGAS (AP) — The largest manufacturer of bump stocks, the firearm attachments used by the Las Vegas gunman in the worst mass shooting in modern U.S. history, has filed a claim against the deceased gunman's estate that could divert money expected to go to victims' families.

Slide Fire Solutions, LP, said in a filing in a Nevada court last month that it may be entitled to a portion of Stephen Paddock's estimated $1 million estate, arguing that Paddock's estate should share in any damages in a separate class action lawsuit against the bump stock manufacturer.

Slide Fire contends that Paddock, not a bump stock, caused the 2017 shooting in which 58 people were killed and hundreds injured at a country music festival on the Las Vegas Strip.

The Texas-based Slide Fire, which stopped taking orders and shut down after the shooting, said Paddock's actions exposed the company to liability claims and his estate should share in any claims the company may be forced to pay in the separate lawsuit.

“Slide Fire, their creditor’s claim, will in effect wipe out the entire estate,” probate attorney Alice Denton, attorney for the special administrator of Paddock’s estate, told the Las Vegas Review-Journal.

F. Thomas Edwards, an attorney for Slide Fire, did not return a message seeking comment Friday.

Investigators said Paddock killed himself as police closed in on his hotel rooms in a tower of the Mandalay Bay casino-resort overlooking the country music festival that he fired upon.

Police and the FBI determined Paddock meticulously planned the attack and acted alone. They theorized he may have sought notoriety, but said they never determined a clear motive for the attack.

In addition to Paddock's homes in Reno and Mesquite, Nevada, his estate included 49 guns worth at least $62,000 that police reported finding in the Las Vegas hotel rooms he used during the shooting or kept at his homes. An anonymous donor pledged to buy the guns, on the condition that they be destroyed, so the proceeds could go to the victims' families.

A hearing had initially been scheduled Thursday that was supposed to finalize plans to destroy the weapons and give families of the 58 people killed an equal portion of Paddock's estate. That hearing has now been pushed back to February and the court will take up Slide Fire's claim at a later date.

“What Slide Fire is doing is taking money from the mouths of widows, orphans, people who lost their kids, and using it to pay for their attorneys. And that’s wrong,” Denton said. “If bump stocks were not made, maybe Stephen Paddock wouldn’t have been able to kill 58 people. The right thing for them to do would be to withdraw the creditor’s claim.”