Filing a new lawsuit in California, 3M said a third party ousted customers of more than $350,000 through sales of fraudulent goods. 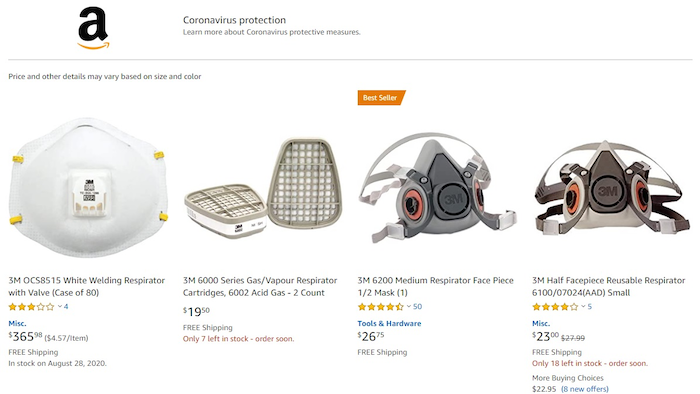 Manufacturing conglomerate 3M — already under pressure to meet soaring demand for its personal protective equipment products and maintain its supply chains — has also had to contend with rampant price gouging and misconduct on behalf of fraudulent online sellers. On Monday, the company said the latest example is a third-party seller on Amazon who grossly oversold fake, defective and damaged respirator products under the 3M brand by as much as 20 times 3M's list price.

St. Paul, MN-based 3M said it filed legal action Monday in a California federal court, asserting that Mao Yu and his affiliated companies falsely represented themselves as 3M on Amazon and charged customers more than $350,000 when customers responded to false listings claiming to be reselling authentic N95 respirators. Instead, those customers received damaged and fake goods at highly-inflated prices.

3M said Amazon learned the defendants misrepresented what would be delivered and that buyers ended up receiving non-3M respirators and in fewer quantities than paid for, along with suspect packaging for the items that were defective or damaged. Amazon has blocked that seller's accounts on its marketplace.

3M's lawsuit seeks both monetary damages and injunctive relief to require the defendants to cease their activities. 3M will donate any damages recovered to COVID-19-related nonprofit organizations.

“3M customers deserve authentic products at fair prices, and this scam is aimed at exploiting the demand for our critical products during the pandemic using 3M’s name connected with price gouging and counterfeiting,” said Denise Rutherford, 3M senior vice president of corporate affairs. “Our collaboration with Amazon is one of the important ways we are working to prevent and combat fraud, and we will report this unlawful activity to law enforcement, as well.”

The company previously announced in early May that it had filed five legal actions in federal courts in Florida, Wisconsin and Indiana to combat fraud and counterfeiting. The lawsuits involve separate defendants who attempted to target government officials with fraudulent offers to sell N95 respirators — in one case claiming to have up to five billion respirators — at inflated prices, all while falsely affiliating themselves with 3M.

“There is no place for counterfeiting or price gouging on Amazon and we’re proud to be working with 3M to hold these bad actors accountable,” said Dharmesh Mehta, Amazon vice president of customer trust and partner support. “Amazon has long-standing policies against counterfeiting and price gouging and processes in place to proactively block suspicious products and egregious prices. When we find a bad actor violating our policies, we work quickly to remove the products and take action on the bad actor, as we’ve done here, and we welcome collaboration from brands like 3M.”

3M added Monday that it hasn't changed the prices it charges for respirators as a result of the COVID-19. Including the new California lawsuit, the company has now filed more than a dozen lawsuits against fraudulent, price gouging and counterfeiting parties. 3M has won five temporary restraining orders and four preliminary injunction orders from courts across the US. The company said that to date, it has successfully removed more than 3,000 websites with fraudulent or counterfeit product offerings from e-commerce platforms worldwide, as well as more than 4,000 false or deceptive social media posts and 100-plus deceptive internet addresses.

On May 7, 3M announced that it was ramping up production of N95 respirators to 95 million per month by the end of 2020.