The fire at the Northern Metals plant in Becker has been belching noxious, billowing smoke since Tuesday. 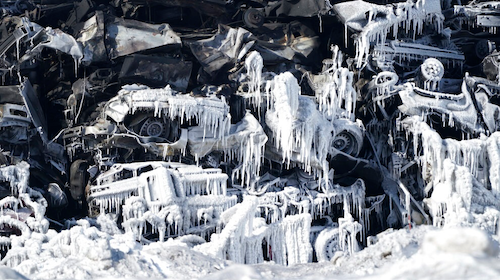 The massive fire at Northern Metal recycling in Becker, Minnesota, that has been burning for days, seemed to be under control Thursday, Feb. 20, 2020 with massive piles of burned cars covered in ice. The Becker Police Department posted Thursday that “major progress" has been made and that fire crews report the fire is “under control at this point.”
Brian Peterson/Star Tribune via AP

BECKER, Minn. (AP) — Firefighters battling a stubborn fire that has been burning for days at a metal recycling plant in a small Minnesota community have got the blaze under control, police said Thursday.

The fire at the Northern Metals plant in Becker has been belching noxious, billowing smoke since it began Tuesday morning. Becker Police Chief Brent Baloun said the cause of the fire remains unknown.

The Becker Police Department posted on Facebook Thursday that “major progress" has been made and that fire crews report the fire is “under control at this point.” Crews were managing smoldering hot spots in the debris pile.

Firefighting crews used heavy equipment to separate a portion of a burning stack of vehicles in hopes that the blaze would eventually die out. The strategy was intended to protect nearby buildings. Police said Thursday that the fire break was “holding its place," and that officials were monitoring air quality.

“It's been a team effort for the majority of the fire departments in the state,” Wark said.

Authorities said no one has been reported hospitalized because of the fumes and no firefighters have been hurt.

The city of 4,500 people requested help from the National Guard, the state Pollution Control Agency and the Health Department.

Residents have not been asked to evacuate, but should stay away from the immediate area of the fire, police said. Becker is about 50 miles (80 kilometers) northwest of Minneapolis.

Northern Metals moved its shredding operation from Minneapolis to Becker last year after the Pollution Control Agency ordered it shut down because of high levels of air pollution and inaccurately recorded pollution.