US Consumer Spending Up 0.4% in November, Best Since July

Economists are expecting consumer spending to remain solid in the final three months of the year to support continued moderate economic growth. 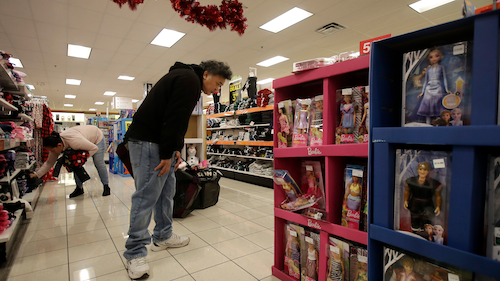 WASHINGTON (AP) — Americans increased their spending in November at the fastest pace in four months, and income growth rebounded to its strongest gain since August.

The Commerce Department said Friday that consumer spending rose at a 0.4% annual rate last month, led by a jump in spending on durable goods like autos. It was up from a more modest annual gain of 0.3% in October, and it was the best showing since July.

Incomes rose 0.5% after a weak reading in October, reflecting a surge in hiring last month in which employers added 266,000 jobs, the most since January.

Economists are expecting consumer spending, which accounts for about 70% of economic activity, to remain solid in the final three months of the year to support continued moderate economic growth. They are forecasting growth of around 2% in the current October-December quarter, similar to the 2.1% gain of the third quarter.

Consumer inflation, as measured by the Federal Reserve’s preferred price gauge, was 1.5% was November compared with 12 months ago. That’s still well below the Fed’s 2% annual inflation target, and it helps validate the central bank’s decision to keep interest rates low with little fear of igniting inflation.

The Fed has highlighted below-target inflation as a reason it could cut its benchmark short-term rate three times this year to aid an economy that was being slowed by uncertainties from the U.S.-China trade war and a global slump. The central bank has signaled that it expects to keep rates unchanged through 2020.

Last month's 0.4 percent increase in consumer spending was led by a 1% surge in spending on durable goods such as autos and appliances.

The saving rate edged up to 7.9% of after-tax income in November, compared to 7.8% in October.