Federal Reserve officials have moved to prevent the central bank from bailing out failing companies, a power it exercised during the 2008 financial crisis. 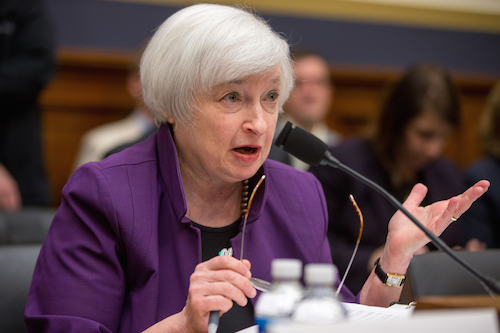 WASHINGTON (AP) — Federal Reserve officials have moved to prevent the central bank from bailing out failing companies, a power it exercised during the 2008 financial crisis.

The Fed governors voted 5-0 Monday at a public meeting to downsize the Fed's emergency lending powers.

Only broad lending programs designed to revive frozen markets — not loans to individual firms — will be allowed. Financial companies that are in solid shape could benefit from those programs. The Fed spent about $2 trillion on such a program to ease a credit crunch during the financial meltdown, aiming to spark lending to consumers and small businesses.

The 2010 law enacted by Congress overhauling financial regulation required the Fed to impose the restraints. Lawmakers of both parties had objected to the Fed's emergency aid to several big Wall Street banks and insurance giant American International Group.

"Emergency lending is a critical tool that can be used in times of crisis to help mitigate extraordinary pressures in financial markets that would otherwise have severe adverse consequences for households, businesses and the U.S. economy," Fed Chair Janet Yellen said before the vote.

For any emergency lending that the Fed does make, interest rates must be set high enough to encourage repayment as fast as possible.

The Fed adopted some of the restrictions proposed in legislation by a bipartisan group of lawmakers led by Sens. Elizabeth Warren, D-Mass., and David Vitter, R-La.

Vitter called the Fed's action "the first real acknowledgement from the Fed that it needed to do more to curtail its own bailout authority."

"American taxpayers should never be on the hook to bail out financial institutions that make unwise and risky bets," Vitter said in a statement.

Warren, the most prominent liberal U.S. Democrat on financial issues, said the action "will help promote market discipline and make the financial system safer." However, she added, Congress still must close loopholes "that the Fed could exploit to provide another back-door bailout to giant financial institutions."

"'Too big to fail' is unfortunately alive and well, and this rule from the Federal Reserve doesn't change that," he said.

The issue of limits on the government's power in responding to financial catastrophe came to the fore in an unusual legal case over the Fed's $85 billion bailout in September 2008 of then-teetering AIG. Former AIG Chairman and CEO Maurice Greenberg sued the government, asserting that the terms of the federal rescue loan were unfairly punitive.

The bailout violated the Constitution's Fifth Amendment by taking control of AIG with 80 percent of the stock without "just compensation," Greenberg's lawsuit alleged. He demanded some $40 billion in damages for himself and other AIG shareholders from the government.

The government insisted that its actions in the AIG bailout were legal, proper and effective, and that the terms were as tough as needed to protect taxpayers from the risk of AIG failing to repay the loan.

Following an eight-week trial in fall 2014 in the U.S. Court of Federal Claims, the judge handed Greenberg a partial victory. He ruled in June that Greenberg's allegation of excessively strict terms was valid, but rejected the former AIG CEO's demand for damages.