Those pricey high-tech systems that automatically stop or slow your car if it's about to run into something are getting a lot cheaper. 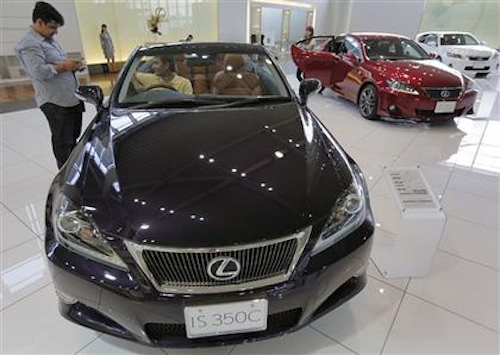 DETROIT (AP) — Those pricey high-tech systems that automatically stop or slow your car if it's about to run into something are getting a lot cheaper.

Toyota says it will offer lower-cost versions of the safety features in new Lexus and Toyota SUVs that it's introducing this week at the New York auto show, and the cheaper devices will spread across most of the company's models by the end of 2017.

Currently, the systems cost around $2,000 or more and are found mainly on luxury cars or high-end versions of mainstream vehicles. Often to get the equipment, buyers also have to pay for other items in a package such as a sunroof or leather seats. But Toyota says that on the 2016 RAV4, the Lexus RX and some other models, the equipment will be available at about $300 to $635.

Initially Toyota customers may have to pay for high-end versions of the vehicles or pay for packages with other options, but Toyota's goal is to make the systems as accessible as possible, spokeswoman Cindy Knight said. Packaging details are still being worked out, she said.

Toyota says it can sell the systems cheaper because it's mass-producing them, plus the cost of cameras and other sensors continues to fall. And industry analysts say the lower prices could give Toyota an advantage over the competition, at least for a short time.

The lower price tag will appeal to the typical Toyota buyer, who is practical and would consider the devices if the cost is appealing, said IHS Senior Analyst Stephanie Brinley. It also lets Toyota tell the story of "This is how we can take care of our customers and our drivers."

But more importantly, she said, it makes the safety devices available to a wider range of people quickly, and that is likely to prevent crashes and save lives.

Brinley expects other automakers to follow Toyota shortly in lowering prices and making the devices available on more models.

Automatic braking is following the usual progression of automotive safety features, starting in luxury cars and falling in price as it makes its way to loaded-out mainstream cars and eventually to all vehicles. Air bags and electronic stability control followed a similar pattern, although they were eventually required by the government, Brinley said.

For Toyota vehicles, the $300 package will use cameras, laser and radar to find objects ahead of the car. If the system figures out that a collision is possible, it alerts the driver with lights and sound. If the driver brakes, the system will add more braking force. And if the driver doesn't react, the system will brake the car and could even bring it to a complete stop, Knight said.

The system also reads lane lines and alerts the driver if the car starts to drift. And it automatically switches the high-beam lights on and off at night when there's oncoming traffic.

A higher-end package costing about $500 combines cameras and a more sophisticated radar for better performance, including pedestrian detection and cruise control that keeps the car a safe distance from vehicles in front of it. Lexus models will get a package that's similar to the higher-end Toyota system, costing from $500 to $635, the company said.

The Toyota system will debut this fall on the RAV4 and Avalon, plus three models that haven't been revealed.

The Lexus system will debut in the RX and four other models to be announced later.

The systems also make buying a car more complicated, because people will have to consider whether they want the added layers of safety, Brinley said.

"Buying a car is no simple matter anymore," she said. "There's no just kicking the tires and driving it around the block and calling it good."