Welcome to the RoboCup, where more than a thousand soccer-playing robots from forty countries have descended on the Dutch technology Mecca of Eindhoven this week with one goal in mind: beat the humans. Eventually. The tournament's mission is to defeat the human World Cup winners by 2050 — creating technology along the way that will have applications far beyond the realm of sport. 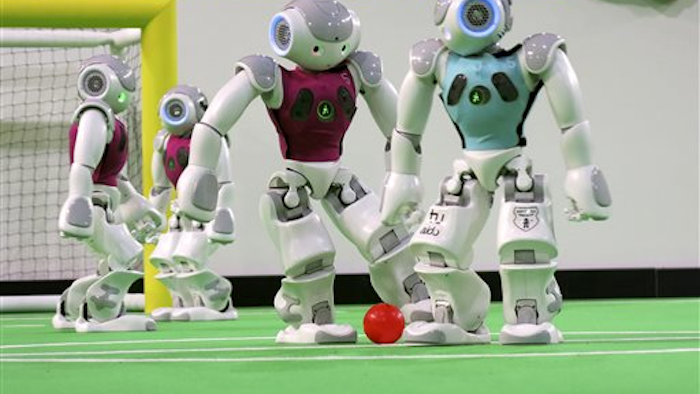 EINDHOVEN, Netherlands (AP) -- With the score tied 1-1, it's gone to a penalty shootout in a tense soccer match between teams from Israel and Australia.

As the Australian goalkeeper in his red jersey braces for the shot, the Israeli striker pauses. Then he breaks into a dance instead of kicking the ball.

Perhaps he can be forgiven: He's a robot, after all.

Welcome to the RoboCup, where more than a thousand soccer-playing robots from forty countries have descended on the Dutch technology Mecca of Eindhoven this week with one goal in mind: beat the humans.

The tournament's mission is to defeat the human World Cup winners by 2050 — creating technology along the way that will have applications far beyond the realm of sport.

To achieve the goal, organizers have created multiple competition classes — including small robots, large robots, humanoid robots and even virtual robots — with plans to merge their techniques into a single squad of all-star androids capable of one day winning a man vs. machine matchup.

For now, Lionel Messi doesn't need to look over his shoulder. Humanoid robots have difficulty keeping their balance, and the largest — human height — move more like, well, robots than world-class athletes.

"To be honest, I think a 3-year-old could win against any of the humanoid teams," says Marcell Missura of the University of Bonn, whose NimbRO team won the "teen" humanoid class in Mexico City last year.

NimbRO's 3-foot (120 centimeter) striker sports a shock of white hair and a flashy pink bandanna as it towers above a Japanese opponent in one match. That's because the Japanese player doesn't have a head, just a prong with a camera mounted on top.

The NimbRO striker shuffles over to the ball where it lies near one sideline, centers itself carefully, and then raises its head to gauge the placement of the goal. It then shifts its weight to one foot, draws back the other foot and kicks.

The shot is not powerful, but it's spot on, and it leaves the opposing keeper flat-footed.

"It's starting to look like soccer," Missura says hopefully.

Missura says his robot's outfit, which also includes a pair of shorts that hang clumsily from its robotic hips, actually hinders its performance, leading to overheating. But making the bots look human is part of his task.

"If they're ugly they will not be accepted by people," he said. "Plus it is a little fun."

While the humanoid robots have a long way to go, it's a different story when robots are allowed to be robots — that is, with wheels, joints that can pivot 360 degrees and a wide array of sensors.

The smallest robots, each about the size and shape of a birthday cake, swarm across their field, weaving around like piranhas. These bots play with a golf ball they tick into the goal so powerfully it's difficult to see it happen.

As in all the divisions, once a game starts, there's no human interference — except for substitutions, when humans are allowed to remove a bot that has broken down, and when referees eject a player for fouling an opponent.

The mid-size robot competition — which some fans refer to as "the R2-D2 league" — most resembles real soccer, played on a 60 foot (18 meter) long court.

Majid Gholipour, leader of teams from Iran's Qazvin Open University, says his mid-size bots, which are shaped like buoys, have a top speed of around 14 mph (22 kph).

The bots use different kicks for passing and shooting, and they communicate their position to each other via wireless Internet connections.

The University of Eindhoven's "Tech United" is favored to repeat as mid-size winner. But the Iranians were runners-up in 2012, and Gholipour says his robots' strategy is becoming more complex.

"If they are losing, they go on the attack," he says. "If they are winning, everybody goes to defense. Like Italians."

Both the Dutch team and the Iranian team confide that they've got a secret weapon this year: "path planning," where the ball is passed toward open space as a robot scoots to intercept it.

But arguably the most enjoyable matches to watch are in the "standard platform" division, where all contestants use the same small humanoid robot, manufactured by Aldebaran Robotics. These are built with a stylish white design that includes glowing eyes that can change color to signal 'emotion.'

In this league, the challenge is purely in the software: the best computer code wins.

Many teams play looking like they're drunk. When programmers push the limits on speed, the bots tend to fall down even more often than human professionals do.

But watching the bots stand back up, rotating their knees forward and pushing up off of one hand, it's possible to envision them running and jumping someday.

Unlike with human players, there are no prima donnas among the robots. Each plays every position equally wall, and they shift roles seamlessly. Goalkeepers have been known to come out and act as strikers. And when a bot gets a shot on goal, it rarely misses.

"That's the advantage a robot has over a human," says Dickens He, on the University of Pennsylvania's 'UPennalizers' team. "There are no mistakes: a robot does what it is programmed to do."

Tournament director Rene van de Molengraft says the humanoid bots range from as little as $5,000 for the standard platform bots, when bought in bulk, to $35,000 or more for handmade adult-size models, which are taller.