Who would have expected a toilet to one day filter water, charge a cellphone or create charcoal to combat climate change? 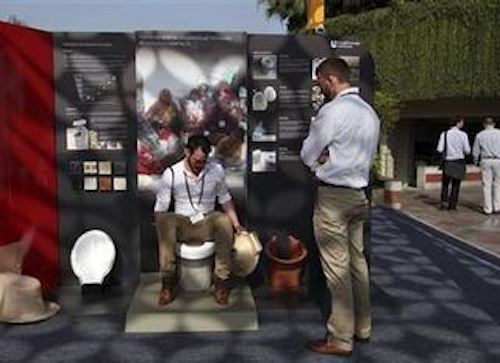 NEW DELHI (AP) -- Who would have expected a toilet to one day filter water, charge a cellphone or create charcoal to combat climate change?

These are lofty ambitions beyond what most of the world's 2.5 billion people with no access to modern sanitation would expect. Yet, scientists and toilet innovators around the world say these are exactly the sort of goals needed to improve global public health amid challenges such as poverty, water scarcity and urban growth.

Scientists who accepted the Bill & Melinda Gates Foundation's challenge to reinvent the toilet showcased their inventions in the Indian capital Saturday. The primary goal: to sanitize waste, use minimal water or electricity, and produce a usable product at low cost.

The World Bank estimates the annual global cost of poor sanitation at $260 billion, including loss of life, missed work, medical bills and other related factors. India alone accounts for $54 billion - more than the entire GDP of Kenya or Costa Rica.

India is by far the worst culprit, with more than 640 million people defecating in the open and producing a stunning 72,000 tons of human waste each day - the equivalent weight of almost 10 Eiffel Towers or 1,800 humpback whales.

Pooping in public is so acceptable that many Indians will do it on sidewalks or in open fields. Gaze out the window of any Indian train and face a line of bare bottoms doing their business on the tracks. Meanwhile, diarrheal diseases kill 700,000 children every year, most of which could have been prevented with better sanitation.

"In the West, such things are a nuisance, but people don't lose their lives," said Christopher Elias, president of global development at the Gates Foundation. "People don't immediately realize the damage done by infections coming from human waste."

India has been encouraging rural communities to build toilets, and last year launched a $1.6 billion program to help. But building sanitation systems in developing countries is not easy. Flush toilets are not always an option. Many poor communities live in water-stressed areas. Others lack links to sewage pipes or treatment plants.

To be successful, scientists said, the designs being exhibited at Saturday's Toilet Fair had to go beyond treating urine and feces as undesirable waste, and recognize them as profit-generating resources for electricity, fertilizer or fuel.

"Traditionally, people have gone into communities and said, 'Let's dig you a pit.' That's seen as condescension, a token that isn't very helpful. After all, who is going to clean that pit?" said M. Sohail, professor of sustainable infrastructure at Loughborough University in the U.K.

The designs are mostly funded by Gates Foundation grants and in various stages of development, though others not created as part of the Gates challenge were also exhibiting on Saturday.

Some toilets collapsed neatly for easy portability into music festivals, disaster zones or illegal slums. One emptied into pits populated by waste-munching cockroaches and worms.

One Washington-based company, Janicki Industries, designed a power plant that could feed off the waste from a small city to produce 150 kilowatts of electricity, enough to power thousands of homes.

The University of the West of England, Bristol, showcased a urine-powered fuel cell to charge cellphones overnight.

Another team from the University of Colorado, Boulder, brought a system concentrating solar power through fiber optic cables to heat waste to about 300 degrees Celsius. Aside from killing pathogens, the process creates a charcoal-like product called biochar useful as cooking fuel or fertilizer.

"At the core are really interesting scientific principles, so translating this into scientific advances that people can relate to is really exciting," said one of the project leaders, Karl Linden, professor of environmental engineering in Boulder. "Biochar is an important subject for scientists at the moment, since it can be used to sequester carbon in the soil for 1,000 years or more."

A team from Beijing Sunnybreeze Technologies Inc. also brought a solar-biochar system, but with the solar panels heating air that will dry sludgy human waste into nuggets that are then heated further under low-oxygen conditions to create biochar.

"We are trying to build a system simple enough to be fixed in the village," technical adviser John Keating said.

One company from the southern Indian state of Kerala was not as concerned with providing toilets as with cleaning them. Toilets are more common in Kerala than they are in much of the country, but no one wants to clean them, said Bincy Baby of Eram Scientific Solutions.

"There is a stigma. The lowest of the low are the ones who clean the toilets," Baby said. Eram's solution is a coin-operated eToilet with an electronic system that triggers an automated, self-cleaning mechanism. With 450 prototypes now looped into sewage systems across India, electrical engineers are lining up for jobs as toilet technicians. "Now, they're proud of their jobs."