Microsoft is following through on a promise to update its Windows 8 operating system on a regular basis to respond to consumers' complaints and other feedback. 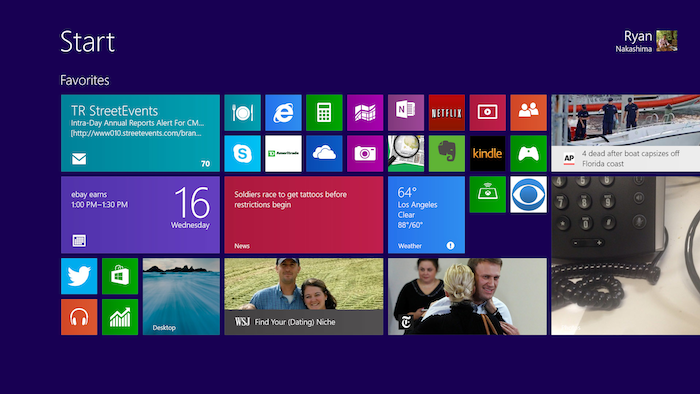 NEW YORK (AP) — Microsoft is following through on a promise to update its Windows 8 operating system on a regular basis to respond to consumers' complaints and other feedback.

Just months after the release of Windows 8.1, Microsoft is preparing changes to make it easier for people to use Windows with traditional keyboard and mouse controls. Among other things, Microsoft will add search, power and settings buttons to the Start page, so people don't have to figure out how to pull those functions from the right side of their screens. The update also promises easier ways to close apps.

Microsoft Corp. outlined some of the new features at a February conference in Barcelona, Spain, and will likely provide more details Wednesday as the company opens its annual Build software developers conference in San Francisco.

The new, yet-unnamed update is expected soon. It follows the October debut of Windows 8.1, which came just a year after the release of Windows 8. The pattern contrasts with Microsoft's past habit of waiting years to release major updates.

Microsoft is also updating its Windows Phone system to work better in corporate environments. The company will add VPN support, for instance, to allow phones to connect with corporate networks securely. There will also be features that consumers in fast-growing emerging markets desire, including the ability for phones to have two SIM cards so people can switch carrier plans easily for the best deals.

The company hasn't announced pricing or specific availability for either update, but both are likely to be free downloads, based on past practice. They could be available as early as this month and will be among the first major software releases since Satya Nadella became Microsoft's CEO in February. It follows Nadella's unveiling last week of Word, Excel and PowerPoint apps for Apple's iPad.

Microsoft may also use the Build conference to update software developers on the company's plans to integrate the Windows Phone 8 system for smartphones, the Windows 8.1 system for tablets, laptops and desktops and the Xbox system for its game console. The company has said it is working to have its various systems share more of the underlying code, while retaining separate interfaces adapted to the specific devices. The integration will make it easier for developers to adapt apps for the various devices.

Microsoft, which is based in Redmond, Wash., saw lackluster demand when Windows 8 and Windows Phone 8 came out in October 2012.

Windows 8 was supposed to be Microsoft's answer to the growing popularity of touch-screen devices such as smartphones and tablets. Instead, research firm IDC blamed Windows 8 for accelerating a decline in global PC shipments, which fell 14 percent in the first three months of 2013, the first full quarter with Windows 8.

Designed as a single system to unify tablets, laptops and desktop PCs, Windows 8 emphasizes touch-screen controls and sports a full-page home screen that is more common on mobile gadgets than traditional computers. Many consumers, however, hate that approach on laptops and desktops.

Last October, Microsoft issued a free update to address some of the gripes. Now, people can run more than two apps side by side. The built-in browser lets people open more than 10 tabs without automatically closing older ones. Windows 8.1 also introduced new features, including a universal search function to help users find files stored on their computers along with Web content on the Internet.

At the time of the release, Microsoft promised to issue new features regularly.

The latest update will do just that. Microsoft has said the company is standing by its decision to embrace touch controls, while acknowledging that many of the remaining Windows gripes have come from people who use non-touch devices.

Meanwhile, Windows Phone 8 came out with a thud some 17 months ago. One of its biggest drawbacks has been a lack of apps available for the system, compared with Apple's iOS and Google's Android. Microsoft is starting to catch up on that front. It has also updated Windows Phone 8 three times since its release to add features. The upcoming update is poised to be the biggest of them all and might get a new name, Windows Phone 8.1.

The release comes as Microsoft prepares to buy Nokia's phone business and patent rights in a 5.4 billion euro ($7.4 billion) deal. The transaction should be completed in the next few weeks, pending regulatory approval in Asia. The deal already has approval in the U.S. and Europe.