Google has signed a long-term lease for part of a historic Navy air base, where it plans to renovate three massive hangars and use them for projects involving aviation, space exploration and robotics. 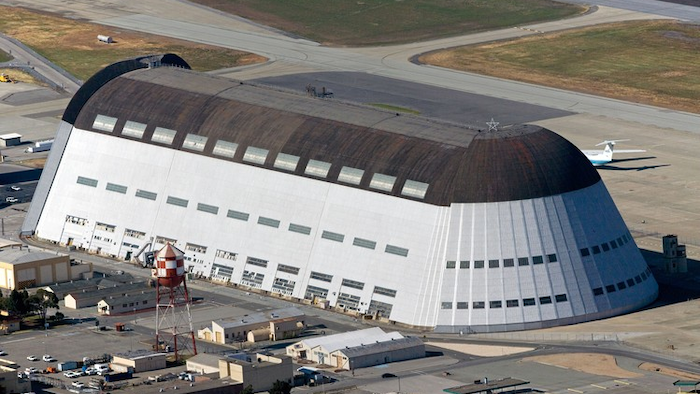 SAN FRANCISCO (AP) — Google has signed a long-term lease for part of a historic Navy air base, where it plans to renovate three massive hangars and use them for projects involving aviation, space exploration and robotics.

The giant Internet company will pay $1.16 billion in rent over 60 years for the property, which also includes a working air field, golf course and other buildings. The 1,000-acre site is part of the former Moffett Field Naval Air Station on the San Francisco Peninsula.

Google plans to invest more than $200 million to refurbish the hangars and add other improvements, including a museum or educational facility that will showcase the history of Moffett and Silicon Valley, according to a NASA statement. The agency said a Google subsidiary called Planetary Ventures LLC will use the hangars for "research, development, assembly and testing in the areas of space exploration, aviation, rover/robotics and other emerging technologies."

Google founders Larry Page and Sergey Brin have a well-known interest in aviation and space. The company has recently acquired several smaller firms that are working on satellite technology and robotics. But a Google spokesperson declined Monday to discuss specific plans for the property, which is located just a few miles from the company's main campus in Mountain View.

NASA plans to continue operating its Ames Research Center on the former Navy site. Google will take over operations at the runways and hangars, including a massive structure that was built to house dirigible-style Navy airships in the 1930s. NASA said the deal will save it $6.3 million in annual maintenance and operation costs.

Google already has a separate lease for another portion of the former air base, where it wants to build a second campus. Page and Brin have also used the Moffett runways for their collection of private jets, under another lease arrangement that's been criticized by some watchdog groups who say NASA gave the executives a sweetheart deal.