RIM turned the email smartphone into a ubiquitous device that many could not live without, but it has struggled mightily as of late. 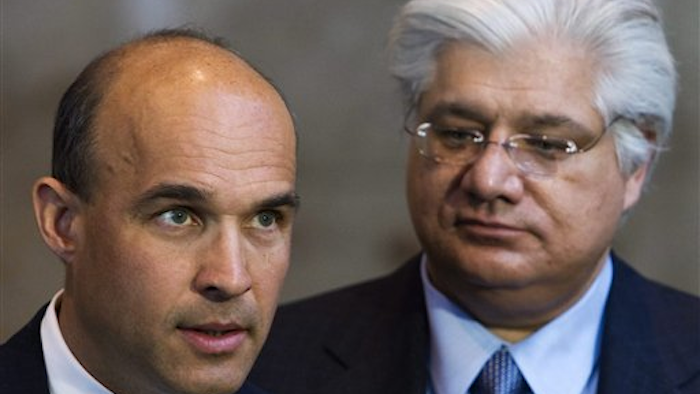 TORONTO (AP) — The new chief executive of BlackBerry maker Research in Motion said Monday drastic change is not needed after he assumed his new job following the departure of Jim Balsillie and Mike Lazaridis, who stepped down as co-CEOs and co-chairmen of the once-iconic, but now struggling company.

The RIM founders have been replaced by Thorsten Heins, a little known chief operating officer who joined RIM four years ago from Siemens AG.

The Canadian company turned the email smartphone into a ubiquitous device that many could not live without, but U.S. users have moved on to flashier touch-screen phones such as Apple's iPhone and various competing models that run Google's Android software. RIM has suffered a series of setbacks and has lost tens of billions in market value.

RIM's survival has been in question but Heins said he didn't think significant change was needed and said the moves were not "seismic" changes. He said he was committed to the vision and new software platform favored by Lazaridis and Balsillie, who announced Sunday they would step down from the top jobs but serve in other roles.

Heins said RIM has to improve its U.S. marketing in an effort go beyond the traditional corporate customer and attract consumers.

"In the U.S. we were very, very successful coming from the core enterprise business and in the public opinion this is still where we're skewed to," Helms said on a conference call on Monday. "We need to be more marketing-driven. We need to be more consumer oriented because this is where a lot of our growth is coming from. That is essential in the U.S."

Shares of RIM fell 3.9 percent, or 66 cents, to $16.34, after the conference call Monday morning after initially moving up almost 4 percent in premarket trading.

RIM said last month that new phones deemed critical to the company's future would be delayed until late this year. And its PlayBook tablet, RIM's answer to the Apple iPad, failed to gain consumer support, forcing the company to deeply discount it to move the devices off store shelves.

Many shareholders and analysts have said a change or sale of the company has been needed, but the sudden departure of the two founders from their top jobs wasn't expected despite their promises that they would examine the co-CEO and co-chairmen structure.

Balsillie and Lazaridis have long been celebrated as Canadian heroes, even appearing in the country's citizenship guide for new immigrants as models of success. They headed Waterloo, Ontario-based RIM together for the past two decades.

"There comes a time in the growth of every successful company when the founders recognize the need to pass the baton to new leadership. Jim and I went to the board and told them that we thought that time was now," Lazaridis said in a statement.

"I agree this is the right time to pass the baton to new leadership, and I have complete confidence in Thorsten, the management team and the company," Balsillie said in the statement. "I remain a significant shareholder and a director and, of course, they will have my full support."

Analysts have said RIM's future depends on its much-delayed new software platform as RIM has tried and failed to reinvigorate the BlackBerry. Apple co-founder Steve Jobs said in late 2010 that RIM would have a hard time catching up to Apple because RIM has been forced to move beyond its area of strength and into unfamiliar territory of trying to become a software platform company.

Heins, 54, said Lazaridis and Balsillie took RIM in the right direction and said he's committed to the new software.

"We are more confident than ever that was the right path. It is Mike and Jim's continued unwillingness to sacrifice long-term value for short-term gain which has made RIM the great company that it is today. I share that philosophy and am very excited about the company's future," Heins said.

Barbara Stymiest, a former chief operating officer of the Royal Bank of Canada who has been a member of RIM's board since 2007, has named chair of the board of directors. RIM also announced that Prem Watsa, the chief executive of Fairfax Financial Holdings, is a new board member. Watsa has become a significant shareholder.

RIM was worth more than $70 billion a few years ago but now has a market value of around 8.9 billion.

Peter Misek, an analyst at Jefferies & Co. in New York, said that after missing the software transition caused by the iPhone, Balsillie and Mike Lazaridis put RIM's future in doubt.

Balsillie acknowledged in December that the last few quarters have been among the most challenging times in the company's history.