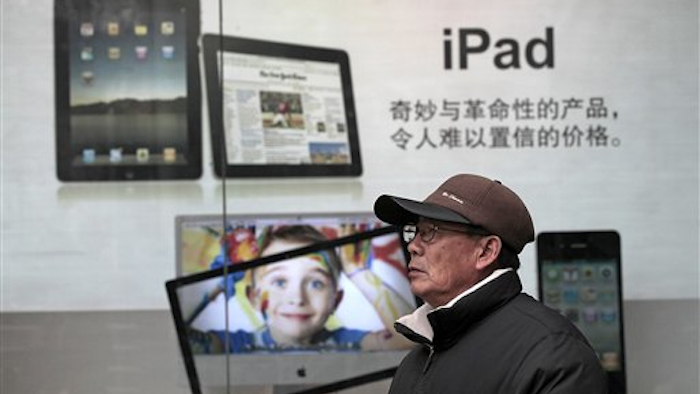 NEW YORK (AP) — Apple said Monday that an independent group, the Fair Labor Association, has started inspecting working conditions in the Chinese factories where its iPads and iPhones are assembled.

Amid growing criticism over labor and environmental practices — especially in China — Apple, last month, disclosed a list of suppliers for its popular gadgets for the first time.

Foxconn, a unit of Taiwan's Hon Hai Precision Industry Co. employs an estimated 1 million to 1.1 million people in China at a series of huge factory campuses. Foxconn assembles iPads and iPhones for Apple, Xbox 360 gaming consoles for Microsoft and other gadgets for companies including Hewlett-Packard and Dell.

In 2010, there was a rash of suicides at Foxconn's Shenzhen plant. Plant managers installed nets to prevent more people from committing suicide by jumping from the roof. A May explosion at the company's Chengdu, China, plant killed three people and injured 15. A New York Times story published Jan. 26 reported on accidents and long hours in Foxconn factories, based on workers' accounts. Foxconn disputed allegations of back-to-back shifts and crowded living conditions.

California-based Apple has been conducting its own audits of working conditions at factories where its gadgets are assembled since 2006. A month ago, it took the additional step of joining Washington-based FLA, a group of companies and universities focused on improving labor practices.

Apple, the most valuable company in the world, is the first technology company to become a member. It committed, at the time, to have the FLA inspect its suppliers, who have pledged full cooperation. The FLA plans to interview thousands of employees at several Apple suppliers about working and living conditions. The audits will cover facilities where more than 90 percent of Apple products are assembled.

The FLA's findings and recommendations will begin to be posted on www.fairlabor.org in early March.

Apple's sales have zoomed even as working conditions at its suppliers have drawn more attention. In the October to December quarter, it sold 37 million iPhones, 15 million iPads and 15 million iPods.

Consumer activism site Change.org gathered 200,000 signatures for a petition to ask Apple to protect workers around the time of new product releases, when the workload spikes. Activists hand-delivered printouts of the signatures to Apple stores last week, but the group has stopped short of arranging protest gatherings or calling for a boycott.

Meanwhile, investors keep bidding up the company's shares in the wake of the company's staggering sales and profit over its holiday quarter. Apple's stock surpassed $500 for the first time Monday, giving the company a market capitalization of $465 billion. Exxon Mobil Corp., which has been trading the No. 1 position with Apple since last summer, has a $400 billion market cap.