Authorities have raided over 1,900 Chinese factories in the past 6 1/2 years, closing 909 for safety and labor violations. Sanctioned factories rarely bother to fix those problems, preferring to reopen under a new name. 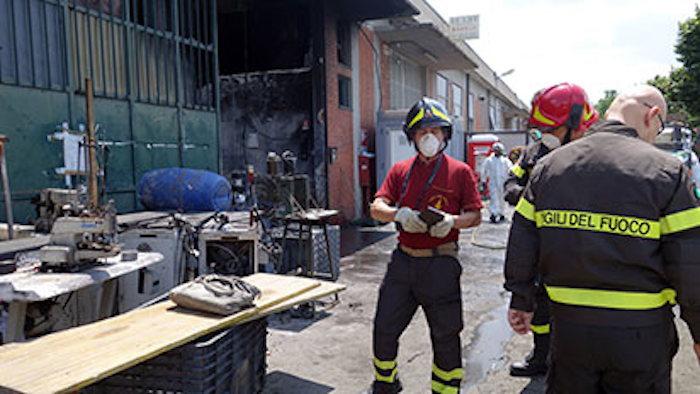 PRATO, Italy (AP) — There was no fire alarm at the garment factory outside Florence where Chen Changzhong worked and lived.

Heat finally startled him awake the morning of Dec. 1, 2013. Before him was a maze of burning fabric. He raced through the building, the only worker to survive.

It was the deadliest in living memory, exposing the true costs of cheap clothes and the pursuit of profit over safety in the thriving, illicit economy that has grown in the wake of Chinese immigration to Italy.

The fire spurred authorities to redouble enforcement, with a campaign of factory inspections kicked off last month.

It inspired the Chinese consulate in Florence to rally more than 400 Chinese businesses to pursue stronger safety measures.

Five people now face homicide charges including — in a rare move — two Italians who owned the building. Prosecutors contend they failed to meet basic safeguards such as fire alarms and adequate fire extinguishers. Defense lawyers say their clients are not guilty.

The savings on tax and labor have given businesses that break the law a crushing competitive advantage.

In a sign of the growing global impact of Chinese crime, the justice ministers of China and Italy last month signed a memorandum of cooperation on investigations in the fight against transnational organized crime.

"Chinese communities are very closed and difficult to penetrate," said Franco Roberti, Italy's chief anti-mafia prosecutor. "Until now, we haven't had the possibility of relating with Chinese investigative authorities."

Gino Reolon, the provincial commander of Italy's financial police, said Prato serves as a laboratory for the study of Chinese organized crime. "It's like a virus, a new disease," he said.

More than 40,000 Chinese live in Prato, some 15,000 illegally. The area has one of the highest concentrations of Chinese in Europe. Many migrants started their own businesses and created a kind of outsourcing in which merchandise wasn't exported; China itself was.

Teresa Moda was one of thousands of Chinese factories that churn out cheap "fast fashion" garments, taking advantage of the proximity to Europe, their main market, and the cachet of the "Made in Italy" brand. Yet the clothes are made by Chinese workers in Chinese factories.

Critics say migrants brought a cultural disregard for regulations that don't maximize profit, which has allowed Chinese businesses to thrive right through the global financial crisis.

Authorities have raided over 1,900 Chinese factories in the past 6 1/2 years, closing 909 for safety and labor violations. Sanctioned factories rarely bother to fix those problems, preferring to reopen under a new name, according to Flora Leoni, a municipal police captain.

Prosecutors said the only fire exit at Teresa Moda was blocked by tons of flammable fabric, an assertion a defense attorney contests.

Workers slept at the factory, illegally. According to court documents, Chen put in 13 hours to 17 hours a day for 2 euros to 3 euros an hour, a fraction of Italy's legal minimum wage. He and five co-workers were in Italy illegally. They had worked until nearly 2 a.m. the morning of the fire.

Prosecutors said the deaths could have been prevented.

Authorities spent months trying to prove a woman named Lin You Lan was actually in charge of Teresa Moda and that the legal owner was a front. Chinese companies often open and close quickly to avoid scrutiny, and prosecutors said Teresa Moda was the fourth company Lin had run out of the same building.

Lin's defense lawyer, Gabriele Zanobini, said she was an employee of Teresa Moda and never owned a business at the address. After the fire, Lin helped send 900,000 yuan ($147,000) to each dead worker's family. Zanobini said the payments were made out of a sense of moral responsibility, not an attempt to derail the trial.

The funeral for the fire victims took place the third Saturday of June, after months of contention about how to cover costs. Volunteers handed out water to the crowd in the heat.

Chen listened from a shaded spot of grass. A shiny scar snaked around his thumb and up his left arm, the burn a mark of survival. He listened as the Chinese consul general urged factory owners to make their workplaces safer.

"All of us should reflect profoundly," said Wang Xinxia, "to learn this lesson of blood."