A diverse coalition including retailers, manufacturers and farmers and other supply chain stakeholders sent a letter to President Obama urging the government’s immediate involvement in contract negotiations between the Pacific Maritime Association and the International Longshore and Warehouse Union. 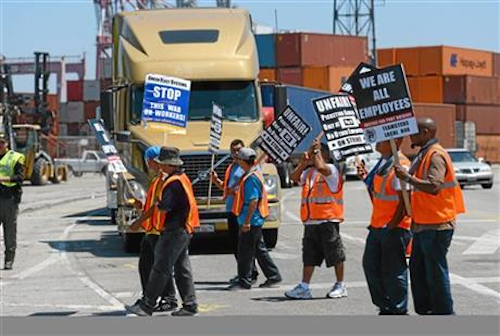 WASHINGTON – A diverse coalition including retailers, manufacturers and farmers and other supply chain stakeholders sent a letter to President Obama urging the government’s immediate involvement in contract negotiations between the Pacific Maritime Association and the International Longshore and Warehouse Union. Management and labor have held talks since May but have yet to approve a final agreement on a contract that expired in July, which covers dockworkers at 29 West Coast ports.

While the two parties have said they would remain at the negotiating table until a new deal is struck, recent labor activities – most recently at the Port of Seattle and Port of Tacoma – have led to a noticeable uptick in rhetoric and tensions that is causing the nation’s importers and exporters anxiety and alarm.

“The sudden change in tone is alarming and suggests that a full shutdown of every West Coast port may be imminent,” the letter said. “The impact this would have on jobs, down-stream consumers, and the business operations of exporters, importers, retailers, transportation providers, manufacturers, and other stakeholders would be catastrophic.”

The coalition, led by the National Retail Federation, detailed the impact of a port shutdown, including damaging the viability of the West Coast ports and the economic consequences of disrupting the supply chain. NRF and the National Association of Manufacturers issued an economic analysis in June that found a port shutdown would cost the economy approximately $2 billion a day.

The group called on the Administration to become engaged in the contract negotiations before a disruption can occur, and recommended the use of a federal mediator to forestall any threat of a management-directed lockout or labor-initiated strike.

“We believe immediate action is necessary and the federal government’s use of all of its available options would be helpful in heading off a shutdown and keeping the parties at the negotiating table,” the letter said. “This includes encouraging the parties to begin working with a federal mediator through the Federal Mediation and Conciliation Service.”