To Close Tax Loopholes, Obama Would Open New Ones

President Barack Obama wants to close dozens of loopholes that let some companies pay little or nothing in taxes. But he also wants to open new ones for manufacturers and companies that invest in clean energy. 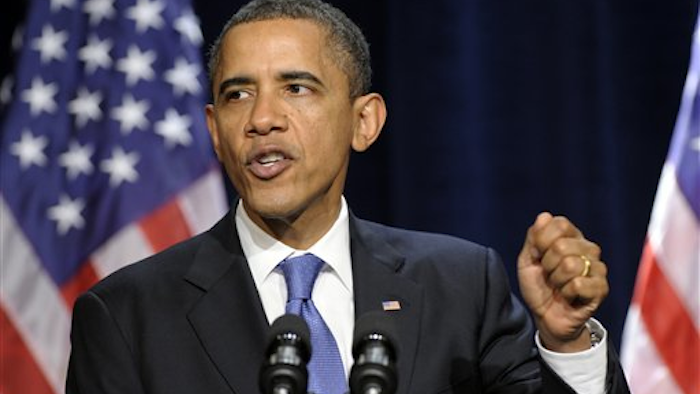 WASHINGTON (AP) — President Barack Obama wants to close dozens of loopholes that let some companies pay little or nothing in taxes. But he also wants to open new ones for manufacturers and companies that invest in clean energy.

To some analysts, the new loopholes risk upending the level playing field Obama says he wants to create.

Some also fear that companies could game the system to grab the new tax breaks.

"The administration is not making sense," says Martin Sullivan, contributing editor at publisher Tax Analysts. "The whole idea of corporate tax reform is to get rid of loopholes, and this plan is adding loopholes back in."

The plan the government rolled out Wednesday goes a long way toward doing that. It lowers the official corporate tax rate from 35 percent to 28 percent. And it eliminates many tax loopholes.

But the plan gives manufacturers new tax breaks, which would cut their effective tax rate to no more than 25 percent.

Other economists oppose a separate plank of the Obama plan: a minimum tax on foreign earnings of U.S. multinational companies. No other country imposes such a tax on its companies, they note. U.S. businesses would face a competitive disadvantage.

Facing resistance from Republicans and many businesses, Obama's plan is in any case a longshot proposal so close to Election Day.

"For anything that Obama recommends during an election year and with a divided Congress, the best one can say is, 'Good luck,'" says Henry Aaron, senior fellow in economic studies at the Brookings Institution. "Those who stand to lose are really upset and will work hard to defeat it."

Just about everybody agrees something has to change. When Japan enacts a corporate tax cut in April, the United States will be left with the highest corporate tax rate in the developed world.

That puts the U.S. companies that actually pay the official corporate tax rate at a disadvantage against their foreign competitors. (Many U.S. companies effectively pay lower rates because of tax breaks.)

The loophole-riddled U.S. tax code now benefits numerous industries over others. One tax break, for example, lets oil companies write off drilling costs immediately instead of over time, as most businesses must.

The administration says the point of its tax plan is to give corporations a more competitive tax rate and to make the system fairer and more efficient — not to squeeze more overall tax revenue from corporations. Treasury Secretary Timothy Geithner calls the current tax code "fundamentally unfair." But the administration also needs to end some loopholes to help pay for a lower corporate tax rate.

The White House argues that tax breaks for manufacturers could ultimately pay off for the economy. When factories expand, for example, the benefits tend to spill into other businesses: Shipping companies and warehouses must add jobs, too, to transport and store the goods that manufacturers are producing.

Economists also note that manufacturers account for a disproportionate amount of the research and development that create innovative products and new ways of doing business. The National Science Foundation has found that manufacturing companies are nearly three times likelier to introduce a new or significantly improved product than other companies are.

"Does manufacturing deserve special treatment? This is a hot debate," says Elisabeth Reynolds, executive director of the Industrial Performance Center at the Massachusetts Institute of Technology. "A case can be made that there's a reason to encourage more manufacturing in the United States because of its links to innovation."

Other economists say that argument is overstated. Among the skeptics is Obama's own former economic adviser, Christina Romer, an economics professor at the University of California, Berkeley. In a column this month in The New York Times, Romer argued that there was no economic justification for the government to favor manufacturers over service-oriented companies.

The administration hasn't yet defined which companies would qualify for the manufacturing or clean-energy-tax incentives. Tax analysts suspect that some companies would work the political system to make sure they're eligible for any new tax breaks.

Every lawyer, every accountant, every doctor is going to claim to be a manufacturer," says Ken Bezozo, managing partner in the New York office of the law firm Haynes and Boone. "It's going to be a wonderful thing for lobbyists. They're going to be coming down on Congress like ants at a picnic."

Analysts are also divided over Obama's plan to impose a minimum tax on companies' foreign earnings.

Lacking such tax breaks, companies that do all their business in the United States suffer a competitive disadvantage.

But big U.S. companies complain that they already pay taxes to foreign governments on the income they earn in those countries. A U.S. tax on that income, they argue, would amount to double taxation.

That would raise costs for U.S. companies operating overseas, making them less competitive. Instead, the United States should move toward a "territorial" tax system, business groups argue. Tax would apply only to income earned within the United States.

"No other developed country imposes such a 'minimum tax' on the foreign earnings of their corporations," said the Business Roundtable, a trade group of chief executives of large U.S. companies.

The minimum tax proposal for international earnings "is totally misguided both from a competitive standpoint and a jobs standpoint," said Gary Hufbauer, a senior fellow at the Peterson Institute for International Economics. "Obama's plan, if enacted, will shrink the U.S. footprint in world markets and lose jobs."