The now-bankrupt company employs some 7,400 people, with roughly 4,700 working at its Wichita facility. 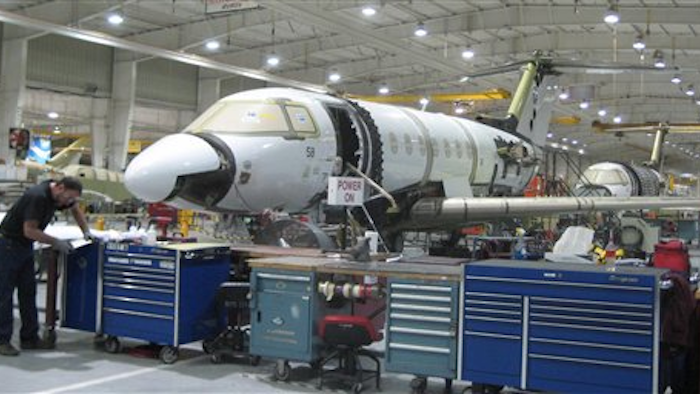 WICHITA, Kan. (AP) — Hawker Beechcraft filed for bankruptcy protection Thursday in the latest blow to Wichita's beleaguered aircraft industry, with the company saying it had reached an agreement with many creditors on a plan to restructure its debt.

Hawker Beechcraft, which is based in Wichita, said in a statement that it filed for Chapter 11 bankruptcy protection in federal bankruptcy court in New York to expedite the prearranged restructuring of the company and some of its subsidiaries. The company said more than two-thirds of its biggest secured lenders and bondholders have agreed to the plan, which calls for about $2.5 billion in debt and almost $125 million in annual cash interest expenses to be eliminated.

The company also said it had obtained a commitment for $400 million in financing that will enable it to continue paying employees, venders and others. It said all orders will be fulfilled and service to customers will be uninterrupted.

The company employs some 7,400 people, with roughly 4,700 working at its Wichita facility. It also has factories in Little Rock, Ark., Britain and Mexico, as well as more than 100 service centers worldwide.

Hawker Beechcraft Corp., which is owned by Onex Partners and GS Capital Partners, a Goldman Sachs private equity fund, has struggled with tepid demand for its military planes and business jets over the past few years.

"We are pleased to have reached an agreement with our largest lenders and bondholders on a solution to stabilize and improve our capital structure," Robert Miller, CEO of Hawker Beechcraft Inc., which is the parent company of Hawker Beechcraft Corp., said in a statement. "In the last three years, the company has made aggressive transformational changes in all operational functions, and today's announcement represents the next step forward."

Wichita, the self-proclaimed "Air Capital of the World," is the home of major manufacturing plants not only for Hawker Beechcraft but also for Boeing, Spirit AeroSystems, Cessna, Bombardier and more than a hundred smaller aircraft suppliers. But the industry has struggled in recent years. Thousands of aircraft workers here have lost their jobs since the Great Recession, which pummeled plane sales. Another blow came earlier this year when Boeing announced it was closing its defense plant in Wichita.

"Hawker Beechcraft has a long and significant history in Wichita and is a critical part of our state's aerospace cluster," Gov. Sam Brownback said in a statement. "Preserving jobs in Wichita and safeguarding the state's investment are our priorities. We will be working closely with the company's leaders during this restructuring process."

Bankruptcy court records show 18 Hawker Beechcraft entities filed for Chapter 11 protection. The filing shows some 25,000 to 50,000 creditors with estimated assets and liabilities of more than $1 billion. Listed first among Hawker Beechcraft's biggest creditors is the company's pension benefit fund, although the filing did not specify a figure for it.

The company told employees on its website that it was possible it might have to end the pension plan to obtain financing to exit bankruptcy. If so, the plan would be taken over by the federal Pension Benefit Guaranty Corp.

The president of Machinists union did not immediately return a call for comment.

Bankruptcy lawyer Ed Nazar, who represents a couple of subcontractors who are owed money by Hawker Beechcraft, said the bankruptcy may hurt the ability of subcontractors and vendors to get paid for outstanding accounts. He also lamented that the filing wasn't made in Kansas.

"The interests of the local vendors and local suppliers may be better addressed in a local filing," Nazar said.

Since its founding with the highly-leveraged 2007 purchase of Raytheon's former aircraft unit, Raytheon Aircraft, Hawker Beechcraft has carried a heavy debt burden, reporting a total debt of $2.3 billion at the end of 2011, according to its annual statement to the Securities and Exchange Commission.

Some 350 employees were handed 60-day layoff notices last month in the latest round of workforce reductions. The company insisted at the time that the layoffs wouldn't affect its agreement with state and local officials to keep its aircraft operations and at least 4,000 jobs in Kansas until 2020 in exchange for $45 million in incentives.

Hawker Beechcraft can trace its Kansas roots to Beech Aircraft Corp., a company founded by Walter and Olive Ann Beech that began making aircraft in the 1930s. Beech Aircraft became a subsidiary of Massachusetts-based Raytheon Co. in 1980 but continued to build its planes in Wichita until the 2007 sale to Hawker Beechcraft.