One of Smithfield Foods' largest shareholders says a $4.72 billion takeover bid from China's largest meat producer falls short of what the company would be worth if sold off piece by piece. New York-based investment firm Starboard Value LP estimated the pork producer's value at $9 billion to $10.8 billion. 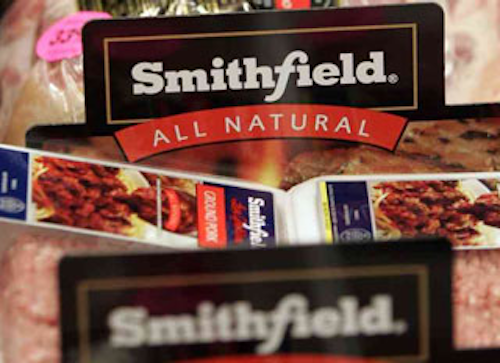 RICHMOND, Va. (AP) — One of Smithfield Foods Inc.'s largest shareholders says a $4.72 billion takeover bid from China's largest meat producer falls short of what the company would be worth if sold off piece by piece.

In a letter to the Smithfield, Va.-based pork producer's board of directors on Monday, the New York-based investment firm Starboard Value LP estimated the company's value at $9 billion to $10.8 billion, or about $44 to $55 per share. Starboard owns about 5.7 percent of Smithfield's common stock.

Under the deal struck last month with Shuanghui International Holdings Ltd., Smithfield will sell itself for $34 per share. The deal, which remains subject to regulatory and shareholder approvals, would be the largest takeover of a U.S. company by a Chinese firm, valued at about $7.1 billion, including debt. Smithfield's stock will no longer be publicly traded once the deal closes, which is expected in the second half of the year.

Starboard said that while the deal with Shuanghui does offer some value, shareholders would be better served if the company focused on selling off its various divisions, which include fresh pork and hog production businesses, as well as an international division.

Smithfield, whose brands include Armour, Farmland and its namesake, also has been focusing on its packaged meats business, which sells deli meats, bacon, sausage, and hot dogs.

Starboard managing member Jeffrey C. Smith wrote that its letter was not necessarily aimed at coming out in opposition to the proposed sale, but added that it "would be remiss, however, to let an opportunity slip by to determine whether the company could realize even greater value for shareholders."

Because Smithfield is contractually prohibited from superior offers or contacting others who may be interested in acquiring parts of the company, the investment firm said it will seek to "identify and connect any strategic or financial buyers."

Prior to last month's announcement, Continental Grain Co., one of the company's largest shareholders, had been pushing Smithfield to consider splitting itself up to reward shareholders. The privately held grain company has since come out in support of the proposed takeover and has sold the bulk of its stake in Smithfield.

Like most pork producers, Smithfield has been caught in a tug of war with consumers. The company needs to raise prices to offset rising commodity costs, namely the corn it uses for feed. But consumers are still extremely sensitive to price changes in the current economy. By raising prices, Smithfield risks cutting into its sales should consumers cut back or buy cheaper meats, such as chicken.