General Motors Co. has promoted veteran executive Alan Batey to the new position of global head of the Chevrolet brand, which accounts for more than half of the company's worldwide sales. Batey also will keep much of his current position, staying on as head of U.S. sales, service and marketing for Chevy, Buick and GMC. He had been head of U.S. sales and interim chief marketing officer. 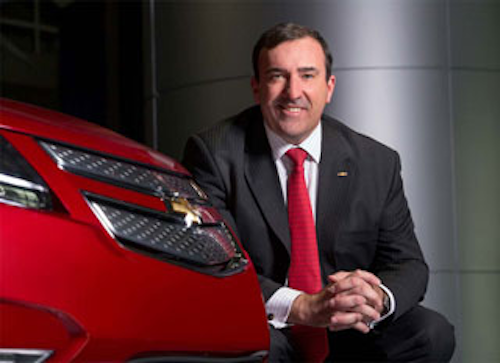 DETROIT (AP) — General Motors Co. has promoted veteran executive Alan Batey to the new position of global head of the Chevrolet brand, which accounts for more than half of the company's worldwide sales.

The move is part of CEO Dan Akerson's effort to restructure the company so executives have global responsibility for each brand.

Batey will report to Akerson is his global role with Chevrolet, and he'll report to North American President Mark Reuss for his U.S. sales job.

GM says it sold more than 1.18 million Chevrolets around the world in the first quarter for its 10th straight quarter of record sales. In the U.S., Chevrolet's largest market, sales were up 5.1 percent through May to almost 822,000. But the gain lagged the whole U.S. auto market, which saw sales increase 7.3 percent, according to Autodata Corp.

U.S. Durable Goods Orders Up In May