A deal between the government and Chrysler over Jeeps linked to deadly fires isn't sitting well with many Jeep owners and auto safety advocates. In early June, after a nearly three-year investigation, the NHTSA recommended that Chrysler recall 2.7 million older Jeep SUVs because the fuel tanks could rupture, leak and cause fires in rear-end crashes. 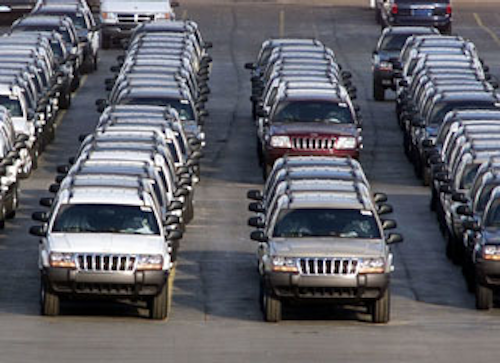 DETROIT (AP) — A deal between the government and Chrysler over Jeeps linked to deadly fires isn't sitting well with many Jeep owners and auto safety advocates.

In early June, after a nearly three-year investigation, the National Highway Traffic and Safety Administration recommended that Chrysler recall 2.7 million older Jeep SUVs because the fuel tanks could rupture, leak and cause fires in rear-end crashes.

The agreement removed about 1.2 million Jeep Grand Cherokees, model years 1999 to 2004, from the recall, leaving some owners confused about the safety of their vehicles. Chrysler argued that those Jeeps have a different design than the ones it agreed to recall and are as safe as comparable models from other automakers.

The about-face has confused people like Els Sipkes, a photographer from near Charleston, S.C. Her 2000 Grand Cherokee isn't being recalled, although the government initially said it should be.

She says that every time she stops quickly, she checks her rear-view mirror. "It's in my mind that if a car crashes into the back of me, that I've got to be on my toes and I've got to get out," she said.

Chrysler won't comment on the recall, beyond the documents it filed with NHTSA outlining its case.

Sean Kane, a frequent critic of NHTSA who heads a safety research company in Massachusetts, said the number of vehicles cut from the Jeep recall is unusual. But the agency frequently negotiates the size of recallswith car companies, he said. For example, in the early 2000s, Ford negotiated a series of smaller recalls that held off a big one for vehicles with cruise control switches that caused fires, he said. But the company eventually recalled more than 10 million vehicles.

David Kelly, former NHTSA chief of staff and acting administrator under President George W. Bush, said Chrysler probably presented data justifying the smaller recall. "I am positive that the agency would never negotiate vehicles out of a recall if they felt they were unsafe," he said.

Yet critics say all the Jeeps should be recalled. And they question whether Chrysler's solution of adding a trailer hitch as an extra buffer in the back is enough to prevent deadly fires.

Under the recall Chrysler will, free of charge, install hitches on any Grand Cherokees from 1993-1998 and Libertys from 2002-2007 that don't already have them from the factory. About 65 percent of Jeeps from that era were sold without factory hitches, according to Ward's Automotive. Chrysler will inspect those with hitches purchased elsewhere and replace them if they have sharp edges that could puncture the gas tank.

The 1999-2004 Grand Cherokees are part of a "customer service campaign." Here, a Chrysler dealer will inspect a trailer hitch installed after the car was purchased and replace it if necessary. But Chrysler won't install a hitch on any vehicle that doesn't already have one.

Chrysler Group LLC, which is majority owned by Fiat SpA of Italy, hasn't disclosed how much the recall could cost, although hitches sell for about $200 each on websites.

On June 3, the government sent Chrysler a 13-page letter requesting a recall of all 2.7 million Grand Cherokees and Libertys in question. The letter included detailed statistics on crashes involving fuel tank fires in SUVs from model years 1993 to 2007. The agency said the data showed the Jeeps were more prone to fuel tank fires than similar models. The Jeeps have gas tanks behind the rear axle, a design that was fairly common when they were built but isn't used much anymore. NHTSA had evidence of 37 Jeep accidents that killed 51 people.

Chrysler argued that the vehicles were safe. The company said its data show the Jeeps are no more prone to fatal crashes than comparable vehicles such as the Ford Explorer, Chevrolet Blazer and Toyota 4Runner. But it agreed to the smaller recall, it says, to improve the Jeeps' safety.

When asked about the government's change of position, spokeswoman Karen Aldana said in an emailed statement that NHTSA let Chrysler remove the 1999-2004 Grand Cherokees from the recall because the design change made them safer than the older models. The agency's full analysis will be published when the investigation is completed, she said.

But NHTSA knew about the change to the Grand Cherokee's design long before it asked for the recall. Documents on NHTSA's website examined by The Associated Press show that Chrysler detailed the change in a November 2010 letter to the agency.

Clarence Ditlow, director of the Center for Auto Safety, an activist group founded by Ralph Nader, said those events show the deal was made by political appointees and not by engineers. Ditlow's 2009 inquiry prompted NHTSA to investigate the Jeeps.

Ditlow is urging NHTSA to test the trailer hitches to see if they offer added safety. Ditlow said a hitch failed to protect 4-year-old Cassidy Jarmon of Cleburne, Texas, who died in a fire after her family's 1993 Grand Cherokee was rear-ended by a car in 2006. The hitch punctured the gas tank, he said. According to news reports, police estimated the Jeep was hit by a car traveling 52 mph.

NHTSA's abrupt position change even worries people who own a Jeep with a trailer hitch.

Soham Vaishnav, a pediatrician from Chicago who uses a wheelchair, had a hitch installed by U-Haul on his 2004 Grand Cherokee. But he's still not convinced it's safe to carry his children, ages 1 and 4. So Vaishnav and his wife are thinking of buying a new car.

"There's just not enough time after a fire starts," he said.

Some owners also fear the controversy will hurt resale values.

"It kind of depreciates the car's value because people would be wary of buying them," said Charles Mangan, a recent college graduate from South Carolina who is moving to New York City. Mangan hopes to sell the 2004 Grand Cherokee he bought used four years ago. His SUV isn't part of the recall, but he's thinking of paying to get a trailer hitch installed.

Newer Grand Cherokees and Libertys aren't as risky as the old ones. Chrysler moved the fuel tank in front of the axle in a 2005 redesign, which helped meet stricter government rear-crash safety requirements imposed that year. The change also brought easier back-seat access and more storage space. The Liberty's tank was moved forward in the 2008 model year.