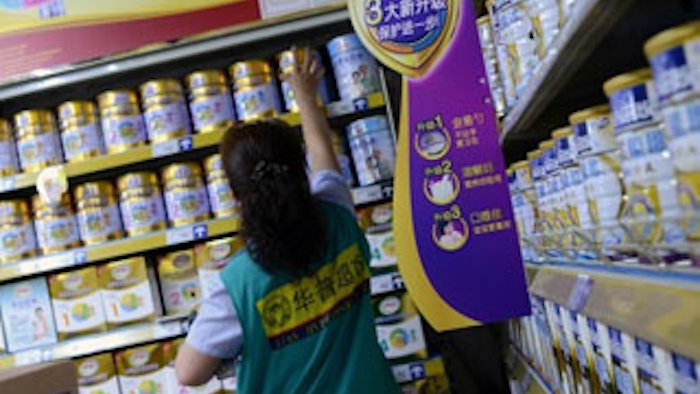 A probe into possible price-fixing by foreign milk suppliers prompted at least two companies — Nestle SA and FrieslandCampina — to announce a price cut.

On Friday, news reports said a Cabinet agency is looking into the cost of drugs made by 60 foreign and domestic suppliers. There was no indication of wrongdoing, but the probe could be a prelude to a cut in government-set caps on prices.

The action could help the new Communist Party leadership that took power last year show its solidarity with a public frustrated by skyrocketing costs for housing, education and health care that have outpaced income gains.

"Imported infant formula has been so expensive that the government feels it needs to take measures to ensure Chinese children can afford the milk powder that they need," said Zheng Fengtian, a professor of agribusiness management at Renmin University in Beijing.

Inflation is politically dangerous for the unelected communist leadership because it erodes the economic gains that underpin the party's monopoly on power.

The ruling party also has tried to curb soaring housing costs with controls on lending and purchases, but prices are still rising.

Both medicines and milk are industries in which scandals over faulty and sometimes deadly products have given foreign and Chinese producers with a reputation for better quality an unusual degree of leverage to charge higher prices.

Imported milk formula that can cost up to three times the price of Chinese competitors is popular because of widespread distrust of domestic dairies following product quality scandals.

Chinese authorities did not accuse baby formula suppliers of collusion in setting prices, which can be hard to prove. Instead, the investigation focused on prices they required retailers to charge.

In response, Nestle SA announced it would cut infant formula prices in China by an average of 11 percent starting Monday. FrieslandCampina, a Dutch dairy cooperative, said it would reduce prices by 5 percent for all its products in China.

Other companies including Danone Dumex, Abbott Laboratories, and Mead Johnson Nutrition Co. said they were cooperating with the investigation but did not immediately respond to questions about whether they would cut prices.

The government has more leverage over drug prices because of official controls. Beijing sets price caps for hundreds of drugs and has been able to force reductions in recent years.

Phone calls to the planning agency were not answered and there was no announcement of the drug probe on the agency's website. An agency spokesman confirmed the milk formula probe earlier in the week.

Last week, police in the central city of Changsha said they detained several employees of British-based drug manufacturer GlaxoSmithKline to investigate possible unspecified "economic crimes." The company said it did not know details of the investigation but would cooperate.

U.S. Trade Deficit Widens To $45B In May