The crash landing of a South Korean airliner in San Francisco has revived concerns that airline pilots get so little opportunity these days to fly without the aid of sophisticated automation that their stick-and-rudder skills are eroding. 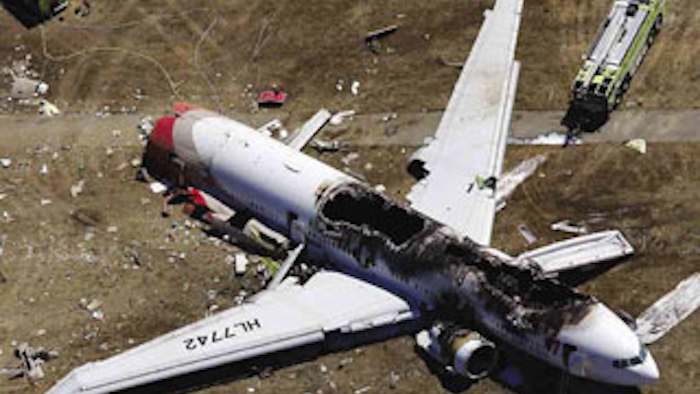 WASHINGTON (AP) -- The crash landing of a South Korean airliner in San Francisco has revived concerns that airline pilots get so little opportunity these days to fly without the aid of sophisticated automation that their stick-and-rudder skills are eroding.

The National Transportation Safety Board, which is investigating the accident, is a long way from reaching a conclusion as to its probable cause. While the focus of their investigation could still shift, information released by the board thus far appears to point to pilot error.

What is known is that Asiana Airlines Flight 214 crashed short of its target runway Saturday at San Francisco International Airport in broad daylight under near ideal weather conditions. The Boeing 777's engines are still being examined, but they appear to have been receiving power normally. And the flight's pilots didn't report any mechanical issues or other problems.

But the plane was traveling far too slowly in the last half-minute before the crash, slow enough to trigger an automated warning of an impending aerodynamic stall.

The wide-bodied jet should have been traveling at 158 mph as it crossed the runway threshold. Instead, the speed dropped to as low as 118 mph before the plane struck a rocky seawall short of the runway. The plane careened briefly and then pancaked down. Two of the 307 people on board were killed, and dozens more injured.

The pilot, Lee Gang-guk, had a lot of flying experience but was still new to the plane, having clocked only 43 hours at the controls. He was supposed to be flying under the supervision of another experienced pilot. There were two more pilots on board the Seoul-to-San Francisco flight, as is typical on long flights during which two pilots rest while two fly, and then swap out.

Lee was also flying without the aid of the airport's instrument landing system, which provides pilots with a glide slope to follow so that the plane isn't too high or low, too far to the right or left. He was also new to the airport, having never landed there before.

And he was manually flying the plane with the autopilot shut off, which other pilots said is not unusual in the last stage of a landing, although some airlines prefer that their pilots use automated landing systems. Still unclear is whether the auto throttle, which regulates power to the engines to control speed, was shut off or perhaps unintentionally left in an idle mode. That might account for the slow speed, but it wouldn't explain why the pilots didn't recognize their peril and act in time to avoid the crash, pilots and aviation safety experts said.

Investigators have started interviewing the flight's four pilots, and hope to wrap up those interviews Tuesday. Procedures at most airlines would require all four pilots be present in the cockpit during the landing, which is the most critical phase of flight, pilots said. The NTSB hasn't disclosed whether all four were present.

"It sounds like they let the airplane get slow and it came out from under them," said John Cox, a former Air Line Pilots Association air crash investigator. "When airplanes are very slow like that, even if they are not stalled, they can develop a sink rate that it takes a lot of power to arrest."

Rory Kay, a training captain for a major airline who flies internationally, said, "We're all wondering the same thing — why no reaction?"

Overall, automation has also been a boon to aviation safety, providing a consistent precision that humans can't duplicate. But pilots and safety officials have expressed concern in recent years that pilots' "automation addiction" has eroded their flying skills to the point that they sometimes don't know how to recover from stalls and other problems. Dozens of accidents in which planes stalled in flight or got into unusual positions from which pilots were unable to recover have occurred in recent years.

"If your last dozen landings were autopilot landings and here you are faced with nothing but visual (cues) to deal with, your rust factor would be greater," said Cass Howell, a former military pilot and human factors expert at Embry-Riddle Aeronautical University in Daytona Beach, Fla. "Too much automation can undermine your flying skills."

5 New Features That Could Be On Your Next Car