Hyundai's U.S. sales are up only 1.9 percent for the first half of the year, less than a quarter of the overall market's 8.4 percent growth rate, according to Autodata Corp. Industry analysts are predicting that sales will rise as high as 15.5 million cars and trucks this year, a million more than last year. 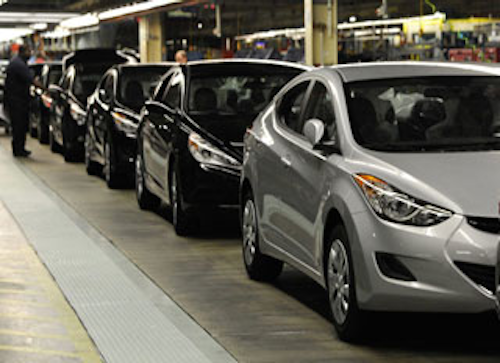 Hyundai's U.S. sales are up only 1.9 percent for the first half of the year, less than a quarter of the overall market's 8.4 percent growth rate, according to Autodata Corp. Industry analysts are predicting that sales will rise as high as 15.5 million cars and trucks this year, a million more than last year, and there are predictions of nearly 16 million in 2014.

A Hyundai factory near Montgomery, Ala., that makes the Elantra compact and Sonata midsize car, the company's two top-selling vehicles, is at capacity, as is a plant in West Point, Ga., run by sister company Kia where Hyundai's popular Santa Fe crossover utility vehicle is made. Other models are made at factories in Korea, which also are at capacity. U.S. CEO John Krafcik said both U.S. plants are on the maximum three shifts with workers on maximum overtime, yet they still can't keep up with demand.

"We have tapped everything at this point," he told reporters at an event at its U.S. research center held to show off a refreshed 2014 Equus luxury car. "There's nothing left."

Yet Krafcik says Hyundai has decided not to build another U.S. factory at this point, instead taking at least a two-year break to concentrate on quality and customer satisfaction.

"I don't know that there's another example in another industry, in our industry, where a company that so clearly had growth potential decided to pass, to make sure that everything is OK, and to build stronger operating systems so that in five or 10 years there would be a stronger company at a higher volume level," Krafcik said.

Hyundai had record sales for the first six months of the year at 361,010. Krafcik said the company has only enough inventory in the U.S. to supply dealers for 44 days. That's the second only to Subaru with 31 days, he said. Hyundai, he said, also isn't spending much money on discounts to sell its vehicles.

The lack of factory capacity means that Hyundai likely underestimated the pace of the U.S. auto sales recovery, said Jesse Toprak, senior analyst for the TrueCar.com auto pricing site. Because of that, the company is missing out on much of the expected growth in auto sales this decade, he said. Auto sales have rebounded from a 30-year low of 10.4 million in 2009.

"Not being able to participate fully in that growth and capturing market share cannot be a good thing," Toprak said. "At the end of the day, if you're not selling cars, you're missing an opportunity."

The company's slower growth this year is all related to its lack of factory capacity and has nothing to do with fierce competition in the key small and midsize car markets, Krafcik said. The slower-than-market sales growth also is not related to the U.S. Environmental Protection Agency's determination that Hyundai and Kia overstated gas mileage claims on window stickers of 900,000 vehicles in the past three years, he said.

The inflated mileage was uncovered late last year by the Environmental Protection Agency in an audit of gas mileage tests by the two South Korean automakers. The agency monitors automobile fuel economy.

The EPA found inflated mileage on 13 models from the 2011 through 2013 model years, including Hyundai's Elantra and Tucson. The window sticker mileages were overstated on about one-third of the cars sold by the companies during the three years.

The companies were forced to knock one or two miles per gallon off the window stickers. Some models lost three or four mpg.

A EPA spokeswoman said Friday that its investigation into the overstated mileage is continuing.

Company executives have apologized for the discrepancies and promised to compensate customers because they're using more gasoline than expected. The executives said the higher mileage figures were unintentional, caused by errors in following EPA mileage test procedures.

Hyundai and Kia are owned by the same company and share factories and research. Their cars have the same underpinnings but different styling and performance.