Japan's industrial output fell in June for the first time in five months, the government said Tuesday as it released data highlighting the fragility of the recovery in the world's No. 3 economy. 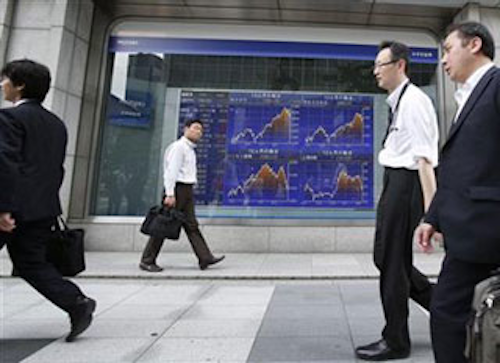 TOKYO (AP) -- Japan's industrial output fell in June for the first time in five months, the government said Tuesday as it released data highlighting the fragility of the recovery in the world's No. 3 economy.

Manufacturing slipped 3.3 percent from the month before in June and was 4.8 percent lower than a year before, the Ministry of Economy, Trade and Industry said.

Such indicators suggest weaker growth in China may be sapping some of the momentum from the recovery. Meanwhile, household spending remained weak, despite a slight increase in incomes in June.

However, other data showed the jobless rate edging down to 3.9 percent, its lowest level since October 2008, when the economy was slammed by the global financial crisis. The jobless rate had remained at 4.1 percent during the previous few months.

The most recent data have officials questioning whether the government should go ahead with a promised sales tax increase that economists say could derail progress in restoring growth and breaking free of deflation.

The central bank governor, Haruhiko Kuroda, said Monday he believes the recovery is strong enough to weather a tax hike, which is needed to help redress ballooning deficits that have taken Japan's national debt to record high levels.

Prime Minister Shinzo Abe has claimed progress with his "Abenomics" strategy of fighting deflation with aggressive monetary easing and higher government spending. But he has indicated he may consider amending the plan for a 3 percentage point increase in the tax next that is slated for April.

Figures released earlier this month showed consumer prices rising 0.4 percent in June, but core inflation which excludes food and energy prices remained negative. Costs for food and energy have largely been pushed higher by the sharp weakening of the Japanese yen, which drives up costs for imported food and energy in this resource-scarce nation.

Prices for desktop computers, imported ground meat and canned fish rose, along with electricity and gas rates. The rise in food prices extends across many categories, from jam to chicken powder, bread to salad dressing.

But prices for many other consumer goods, such as DVD players and digital cameras, have continued to fall.

Overall, household spending fell 0.4 percent in June compared with the month before, despite double-digit increases for some items, such as beef, beer and sushi.

Fresh from a victory for his Liberal Democratic Party in upper house parliamentary elections, Abe has acknowledged that despite signs of improvement, many Japanese have yet to feel a boost from his policies. He has vowed to press ahead with deeper and more fundamental economic reforms intended to help restore Japan's competitiveness.

A key factor will be whether companies begin to invest more and raise wages, to help drive a recovery in consumer demand that accounts for most of Japan's economic growth.

While sales are up by double digits at Tokyo's toniest department stores, overall retail sales fell in June from the month before, with surveys showing consumer spending is slowing, Marcel Thieliant, an economist for Capital Economics, said in a report Monday.

Details of the household spending survey showed a near doubling in discretionary purchases, such as wristwatches, men's suits and golf fees. Property purchases have also surged as families buy homes ahead of the anticipated increase in taxes.

But contrary to the government's expectations, many families appear to be replenishing savings rather than splashing out to beat higher prices later.

"Looking ahead, there are a number of reasons to doubt that the recent strong run of consumer spending can continue," Thieliant said. The 70 trillion yen ($716 billion) increase in household wealth due to the stock market rally earlier in the year accounts for only a small part of overall household wealth, he said.

"With inflation now rising, income growth has to pick up as well for households to maintain their spending power," he said. "The overwhelming majority of households views inflation as negative, and may rein in spending in response."