Toyota's global sales for the first nine months of the year reached 7.41 million vehicles, little changed from the previous year as it continues to outpace General Motors and keep its lead as the world's top-selling automaker. 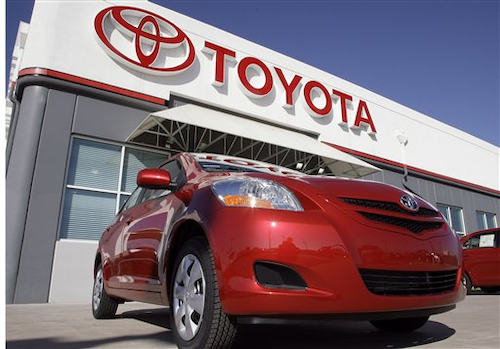 TOKYO (AP) -- Toyota's global sales for the first nine months of the year reached 7.41 million vehicles, little changed from the previous year but outpacing General Motors to keep its lead as the world's top-selling automaker.

Detroit-based GM said earlier this month that its global sales for January through September totaled 7.25 million vehicles, up 4.6 percent from a year earlier.

Toyota Motor Corp. said Monday that it sold about 2.5 million cars, trucks and buses in the July-September quarter, led by overseas growth.

GM had the global sales throne for seven decades before losing the title to Toyota in 2008. GM retook the crown in 2011, when Toyota's plants were slowed by an earthquake and tsunami in northeastern Japan that damaged suppliers of parts.

Toyota has since recovered and was at the top again last year.

Although the maker of the Camry sedan, Prius hybrid and Lexus luxury models is likely to stay the top selling automaker for the whole year, competition with GM and VW remains intense.

GM and VW are growing in China, but Toyota's sales have suffered there because of anti-Japanese sentiment that flared up last year over territorial disputes.

Toyota's growth came largely from strong sales in the U.S., where its Camry, Corolla and Tundra were popular, the company said.

The competition gets even tighter when such models, not in GM's lineup, are excluded from Toyota's tally.