Boeing inked a deal Thursday for five Japanese companies to manufacture key components for its twin aisle 777X jets but the contract doesn't include making the wings, which were a source of delays for the 787 Dreamliner. 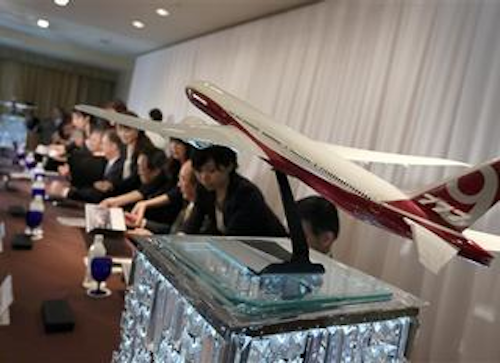 TOKYO (AP) -- Boeing inked a deal Thursday for five Japanese companies to manufacture key components for its twin aisle 777X jets but the contract doesn't include making the wings, which were a source of delays for the 787 Dreamliner.

The Japanese manufacturers will make about 21 percent of the new plane's structural components, including fuselage sections and landing gear wells.

Difficulties in fitting the wings to the body of Boeing's Dreamliner in the U.S. contributed to delays during the manufacturing of the aircraft. The Japanese furnish about 35 percent of the 787, which was the first Boeing plane to have a wing designed and built by a foreign company. Deliveries were delayed for about three years because of various problems.

Boeing Commercial Airplanes President and CEO Ray Conner said having the Japanese make more parts for the 777X was considered, but the decision was to have Boeing make the wing.

Twenty-one percent is the same level Japanese manufacturers got for the predecessor 777 aircraft, one of the most popular commercial jets on the market.

The Japanese manufacturers said the contract was a reflection of their reputation for quality production and punctual deliveries.

Boeing already has 260 orders for the jets, including an order from Japan's All Nippon Airways.

Japan Airlines, which has had a long relationship with Boeing, has not ordered them yet.

ANA was the first customer for Boeing's 787 and JAL also bought some of the planes.

But last year, JAL spurned Boeing and ordered from Airbus for the first time with a deal for 31 A350 planes worth $9.5 billion at list prices.

Even after delivery, the 787 was plagued with problems including batteries that were prone to fires. Boeing has said it dealt with that problem by encasing the batteries to contain any overheating.

Earlier this week, Emirates Airlines cancelled its order for 70 of Airbus's A350 aircraft, the European maker's answer to the domination of the 777 and 787. The A350 has also been plagued by delays. Emirates has ordered 150 777X jets.

The companies declined to disclose monetary terms of Thursday's deal.