U.S. factory output increased for the fifth straight month in June as manufacturers cranked out more aircraft, chemicals and furniture. 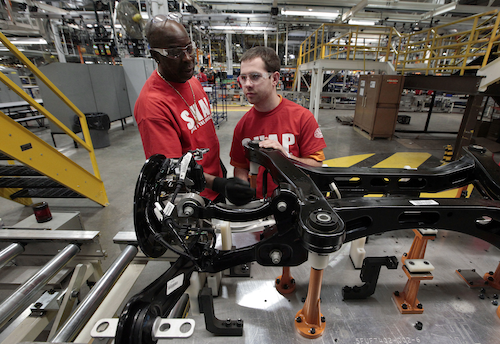 WASHINGTON (AP) -- U.S. factory output increased for the fifth straight month in June as manufacturers cranked out more aircraft, chemicals and furniture. The modest gain underscored manufacturing's role in helping return the economy to growth after a grim first quarter.

Factory production rose 0.1 percent last month, the Federal Reserve said Wednesday, down from a gain of 0.4 percent in the previous month. May's data was revised slightly lower, but April's reading was revised much higher.

Despite June's small increase, manufacturing output rose in the second quarter at the fastest pace in more than two years, providing a critical boost to the economy after it contracted sharply in the first three months of the year. Factory output climbed 6.7 percent at an annual rate in the second quarter, the most in more than two years and up from just 1.4 percent in the first quarter.

Overall industrial production, which includes manufacturing, mining and utilities, edged up 0.2 percent in June, down from a 0.5 percent gain in May.

"The industrial economy is in reasonable shape but the recovery is steady rather than spectacular," said Ian Shepherdson, chief economist at Pantheon Macroeconomics.

Most economists are optimistic that factory output will keep rising. The Federal Reserve Bank of New York said earlier this week that its regional manufacturing index reached a four-year high in July.

Americans are buying more cars and businesses are spending more on steel and other metals and computers. Auto sales reached an eight-year high in June. Auto production slipped last month, the Fed said, but that followed several months of strong gains.

Petroleum output fell, but mostly because of a temporary disruption at a large refinery, according to the Fed's report.

The government's jobs report earlier this month showed that factories added 16,000 positions in June, the most in four months, and the average work week for manufacturing employees remained at a post-recession high.

A survey earlier this month by the private Institute for Supply Management, meanwhile, found that manufacturing expanded in June for the 13th straight month, though at a slightly slower pace than the previous month. Growth was broad-based across nearly all the 18 sectors that the survey covers. The ISM is a trade group of purchasing managers.

The economy shrank 2.9 percent at an annual rate in the first quarter, the worst showing in five years.

But most economists expect growth returned in the April-June quarter. On average, analysts forecast the economy grew at an annual pace of 3 percent in the second quarter, according to a survey by the National Association for Business Economics. While healthy, that's down from a 3.5 percent forecast a month earlier.

Apple, IBM To Team Up On Mobile Devices