A Stable And Impressive Climb For Stock Market In 2012

The stock market just had its best first quarter in 14 years, causing some to raise estimates for the year. 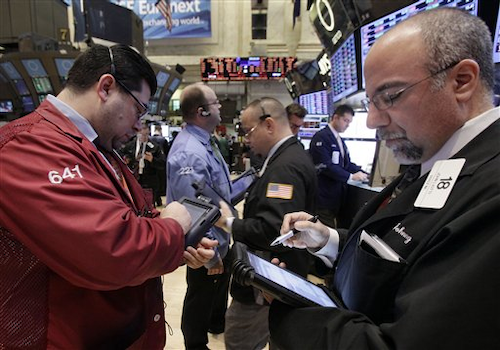 The stock market just had its best first quarter in 14 years. The surge has sent Wall Street analysts, some of whose forecasts seemed too sunny three months ago, scrambling to raise their estimates for the year.

"That it's up isn't surprising. It's the magnitude," says Robert Doll, the chief equity investment manager at BlackRock, the world's biggest money manager.

Doll says stocks could rise 10 percent more before the end of the year. That would be enough to push the Dow Jones industrial average to an all-time high and the Standard & Poor's 500 close to a record.

For the first three months of the year, the Dow was up 8 percent and the S&P 12 percent, in each case the best start since the great bull market of the 1990s. The Nasdaq composite index, made up of technology stocks, has had an even more remarkable run — up 19 percent for the year, its best start since 1991.

"I don't think anyone could have predicted this," says Chip Cobb, a senior vice president at Bryn Mawr Trust Asset Management. For these gains, he says, "I thought it would take all year."

The jump gives money managers like Cobb hope that ordinary folks burned by two deep bear markets in a decade will start buying again, propelling the indexes even higher.

In a remarkable act of self-restraint — or foolishness, depending on your view — they have mostly stayed out of the market. One reason they may jump in now is that fear of looming disasters, like a full-blown debt crisis in Europe or a second recession in the United States, has faded.

Bulls say investors will turn their attention to the only thing that really matters for stock prices in the long run — corporate profits.

Another hopeful sign for gains is that those who have been buying stocks appear to be taking bigger risks than before, suggesting growing confidence.

Last year, investors put much of their money into so-called defensive stocks, such as utilities and health care companies, which make money in bad times as well as good. This year, it's the risky fare that's being scooped up.

Financial stocks are up 22 percent, the best among the 10 industry groups within the S&P. Technology companies are up 21 percent. Consumer discretionary stocks, like hotels and cable companies, are up 16 percent.

Utilities are down 3 percent for the quarter, the only group in the red.

"We were originally accused of being too optimistic," says Sam Stovall, chief equity strategist at S&P Capital IQ. "It doesn't mean we can't have a 10 percent correction, but it's unlikely we will."

The first day of the year set the tone. On Jan. 3, the Dow rose 180 points. Later that month, the Federal Reserve said it would probably keep benchmark interest rates near zero for almost three more years. That sent stocks to their highest levels since May 2011.

It was the best January for stocks since 1997. Skeptics pointed out that profits at U.S. companies, after jumping by double-digit percentages for eight quarters in a row, seemed to be growing much more slowly. They also worried that the number of shares of stock traded each day was low, which suggested a lack of conviction by buyers.

Even a few duds got caught in the upswing. The stocks of Microsoft and Cisco have barely budged this century. This year, they have have risen 24 percent and 17 percent, respectively. Dell, which has languished for years, is up 13 percent.

Some of the big winners of 2012 are perhaps less surprising: Apple has risen 48 percent. Lions Gate Entertainment, the company behind the hit movies "The Hunger Games" and "Twilight," is up 67 percent.

As if the surge weren't enough, the markets impressed long-time stock investors with the way it climbed — slowly and steadily, without the wild swings of bravado and panic that characterized the market much of last year.

The gap between the daily high and low for the S&P has averaged about 0.9 percentage points. It was three times that early last fall, when the market was obsessed with debt problems in Europe and at home, among other fears.

Investor attention turns next to corporate earnings announcements, which begin when aluminum maker Alcoa, one of the 30 stocks that make up the Dow, reports April 10.

Companies in the S&P 500 are making more money than ever, an impressive feat in a tepid economic recovery.

Those who are bullish on stocks note that the S&P 500 trades at 12.9 times expected earnings this year, somewhat cheap compared with its 10-year average of 14.6.

The so-called forward earnings multiple is generally higher than the long-term average during bull markets. If it rose to 16 or 18 this year, stocks would be significantly higher than they are now, even if corporate earnings failed to grow at all.

Some investors say the bulls are fooling themselves if they think big profits this year are assured. Indeed, first-quarter profits for the S&P 500 are expected to fall 0.1 percent from a year earlier, according to a survey of analysts by FactSet, a provider of financial data.

That would be the first time in more than two years that earnings will not have grown. For the full year, analysts are expecting profits will rise a healthy 9 percent, but those predictions depend on a surge of 16 percent in the last three months.

"The idea that we're going to have a huge rebound at the end of the year is unrealistic," says Barry Knapp, head U.S. equity strategist at Barclays Capital.

Knapp says he's bullish on technology stocks but the rest of the market has "overshot the fundamentals." He says he's sticking with his target for the S&P this year: 1,330, which would be a drop of about 6 percent from Friday's close.

Other skeptics of the surge point to the role of central banks around the world in lifting markets by printing money, lending at near-zero rates and buying bonds and other securities.

The fear is that once that support is removed, stock prices could fall, and all the talk about profits could prove beside the point.

The same day the Nasdaq broke through 3,000 earlier this month, Michael Hartnett, chief global equity strategist at Bank of America, published a report with a curious chart showing how stocks reacted to programs by the Federal Reserve to buy bonds, or big announcements about lending rates.

In every case since the market hit a 12-year low in March 2009, prices jumped on the Fed moves, then fell when the programs ended. A question above the chart asked whether it was time to move more money into stocks.

Hartnett's answer was no. The bank expects the S&P to end the year at 1,400, almost exactly where it is now.