Taiwan's Foxconn Technology Group said Saturday that it has raised wages by up to 25 percent. 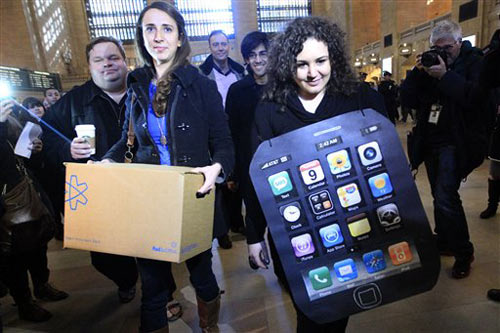 TAIPEI, Taiwan (AP) — Taiwan's Foxconn Technology Group said Saturday that it has raised wages by up to 25 percent in the second major salary hike in less than two years, as the world's largest electronics contract manufacturer comes under intensive scrutiny after a spate of suicides.

Foxconn employs about 1 million workers at its massive plants in China that are run with military-like discipline. The workers assemble iPhones and iPads for Apple Inc., Xbox video game consoles for Microsoft Corp. and computers for Dell and Hewlett-Packard.

Foxconn is also taking measures to limit workers' total work hours, and the raises come as a compensation for their reduced overtime, company spokesman Simon Hsing said in a statement.

The announcement came as the U.S. Fair Labor Association is inspecting Apple's Chinese suppliers for their labor practices.

Foxconn said it is cooperating with the U.S. inspectors, pledging again to provide workers "a safe and fair work environment."

In 2010, a spate of worker suicides at an enormous Foxconn complex in the southern boomtown of Shenzhen drew attention to the stress many young workers faced working in some factories.

The company denied allegations that it ran excessively fast assembly lines and demanded too much overtime, but it soon announced two pay hikes that more than doubled basic worker salaries to up to 2,000 yuan per month.

Last month, dozens of workers assembling video game consoles climbed to a Foxconn factory dormitory roof in the central Chinese city of Wuhan and some threatened to jump to their deaths amid a dispute over job transfers that was later defused.