Volkswagen's CEO said the company is tackling its problems in the wake of a leadership struggle and promised progress on lowering costs and raising profitability. 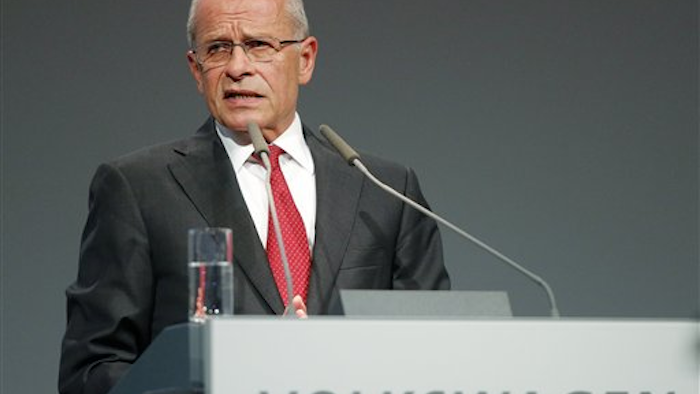 Frankfurt, Germany — Volkswagen's CEO said the company is tackling its problems in the wake of a leadership struggle and promised progress on lowering costs and raising profitability.

Martin Winterkorn said the company's new assembly technology was being deployed on more and more models and would bring lower costs and more production flexibility.

"We do know that we have work to do in this large global group, and have started doing it some time ago," Winterkorn said in his report to shareholders at the company's annual meeting Tuesday in Hanover, Germany.

The meeting opened days after the resignation of board chairman Ferdinand Piech, who lost a power struggle with other board members over Winterkorn. Piech, 78, had made a critical remark about Winterkorn in an interview, but his stance was rejected by other board members. Piech's family and relatives — descendents of Porsche founder Ferdinand Porsche — own 51 percent of Volkswagen through a holding company.

Piech did not say exactly what his problem was with Winterkorn, 67. But the company has struggled to raise low profitability at its core Volkswagen brand and to reverse falling market share in the United States. His departure leaves open how the company will solve those problems.

Acting Chairman Berthold Huber, former head of the IG Metall industrial workers union, said the search for a new chairman would not be rushed. He praised Piech's "extraordinary merits for his service to Volkswagen and to the entire automotive industry."

Winterkorn paid tribute to Piech, saying that he "over the past five decades has shaped the auto industry like no other." Piech served as a product development executive at VW's luxury division Audi and then as CEO of Volkswagen from 1993 to 2002. He is credited with reviving Volkswagen's fortunes with a renewed focus on building cars with better quality and technology.

Winterkorn said Volkswagen was a "fundamentally sound, well-positioned company" but reiterated a cautious outlook for the year, saying there were "large question marks hanging over 2015" due to economic and political uncertaintly. He repeated the outlook for a moderate increase in sales and profit margins between 5.5 percent and 6.5 percent.