The new Chevy Camaro, the sixth generation of the car, is going to be outfitted with a four-cylinder engine making it slimmer and more efficient than its predecessors. 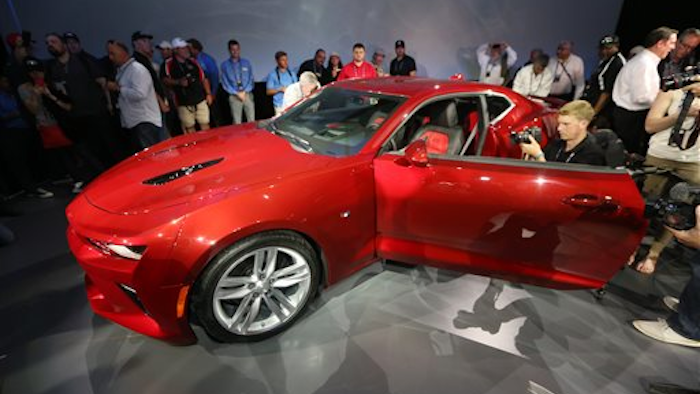 Detroit, Michigan — For almost 50 years, gearheads have swooned over the Chevrolet Camaro for its muscular looks, throaty exhaust and high-horsepower engines.

A four-cylinder engine? Heresy. But that will be the base engine in the sixth generation being unveiled Saturday on a racetrack-equipped island in the Detroit River.

For longtime Camaro fans, word of a four-cylinder engine might conjure up unwanted images of the "Iron Duke." That was the 90-horsepower engine Chevy put in the Camaro in the early 1980s to get better gas mileage following an oil embargo and gasoline shortages. The 1982 Camaro, with the Iron Duke as the base engine, was listed among Time Magazine's 50 worst cars of all time in 2007.

"This is not the Iron Duke," says Al Oppenheiser, chief engineer on the Camaro.

The new 2-Liter turbocharged four-banger puts out 275 horsepower, more than many V8s from years ago. And since the 2016 car is based on the same rear-wheel-drive underpinnings as the Cadillac ATS, lightweight materials such as titanium and aluminum help cut 200 to 300 pounds of lard from the hefty 2015 Camaro.

That makes a four-cylinder engine perform better, even though it's expected to get more than 30 mpg on the highway.

"I think it's going to be the sleeper hot car, very affordable, very attainable for our customers," Oppenheiser says. He expects the four-cylinder car to go from zero to 60 mph in well under six seconds, faster than many older V8-powered cars.

As in the 1980's, fuel economy influenced the decision to use a four-cylinder engine. Although gas mileage isn't a concern for most Camaro buyers, it is for General Motors, which must progress toward meeting U.S. government regulations that require the new car fleet to average 54.5 miles per gallon by 2025.

Camaro buyers can choose a more powerful V6 or V8 engine. No matter what the engine, the lighter Camaro will be more nimble, says Oppenheiser. "It really wakes up the car," he says. "You can easily feel the weight difference."

The Camaro made its debut in 1967 as GM's answer to the wildly popular Ford Mustang. Here are highlights of the 2016 version:

OUTSIDE: Designers tried to keep the muscular, mean looks of the 2015 model, yet make it sleeker. New car is 2 inches shorter than the old one, 1-inch narrower and an inch lower. Distance between wheels is about 1 ½ inches shorter. Exterior was tailored in wind tunnel to improve cooling and reduce wind drag, and it has more of a fastback look. Only two parts carried over from the 2015 model: the Chevy bowtie emblem and the Camaro SS badge.

UNDER THE HOOD: Three choices: The turbo four; a 335-horsepower, 3.6-Liter V6, and in the SS; and a 6.2-Liter V8 from the Corvette with 455 horsepower. Choice of six-speed manual or eight-speed automatic transmissions depending on engine.

GAS MILEAGE: More than 30 mpg highway with the four makes it the most efficient Camaro ever. Mileage testing not done yet on V6 and V8. Both have cylinder deactivation at highway speeds for better efficiency.

JEERS: Smaller car could turn off some traditional Camaro buyers who love the larger, heavier 2015 model and its predecessors.