After long struggling to claw its way out of the Great Recession, the world's biggest economy is on an extended win streak that is edging it closer to full health and ready to drive global growth in 2015. 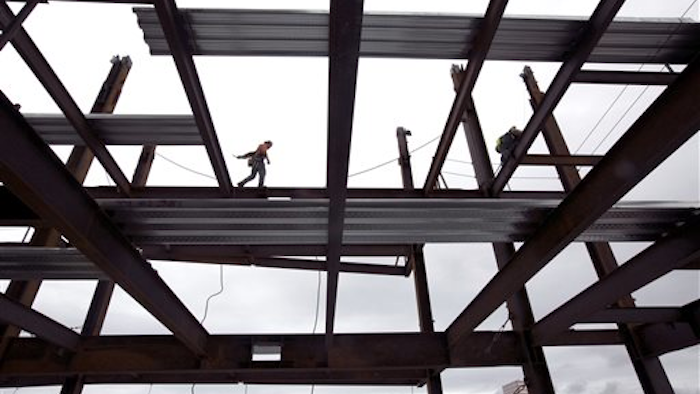 The United States is back, and ready to drive global growth in 2015.

After long struggling to claw its way out of the Great Recession, the world's biggest economy is on an extended win streak that is edging it closer to full health. But the new year doesn't look quite so bright in other major countries.

China is slowing as it transitions from investment to consumption. Japan has slid into a recession. Russia appears headed for one. Europe is barely growing.

Six years after its financial system nearly sank and nearly that long since the recession ended, the United States is expected to grow in 2015 at its fastest pace in a decade. Its expansion from July through September — a 5 percent annual rate — was the swiftest for any quarter since 2003.

That pace will likely ease a bit. Still, the economy is expected to expand 3.1 percent next year, according to a survey by the National Association for Business Economics. It would be the first year of 3 percent growth since 2005.

The acceleration of U.S. growth is a key reason the global economy is also expected to grow faster, at about 3 percent, up from 2.5 percent in 2014, according to economists at JPMorgan Chase and IHS Global Insight.

Plunging oil prices are a big reason for the optimism. Prices have been cut roughly in half since summer. In some areas of the country, gasoline prices have slipped below $2 a gallon. The drop, along with more fuel-efficient cars, will save the average U.S. household $550 on gas next year, according to the U.S. Energy Information Administration. That means consumers have more to spend on items like cars, furniture and appliances.

What's more, Americans' finances are in firmer shape. Job growth is accelerating. Businesses are investing in buildings and software, and home building is expected to pick up.

Lower oil prices will also help Europe and Japan, and the global economy should expand faster than it did this year, economists say. But the divergence between the United States and most of the rest of the world is striking and carries some risks. Big exporters, from China to Germany to Japan, will depend heavily on a recovering U.S. to boost their economies.

A pickup in global growth "is highly dependent on the assumption that the U.S. economy continues to improve," said Douglas Porter, chief economist at BMO Capital Markets. "If that doesn't play out, there's not much left for the global economy to fall back on.

Even if the U.S. economy does strengthen further, the rest of the world could struggle. For one thing, faster growth will likely lead the Federal Reserve to raise interest rates in 2015, which could draw more investment from overseas. The inflow of capital would raise the dollar's value and potentially cause destabilizing drops in other currencies. Governments and businesses overseas that borrowed in dollars would find it harder to repay those debts.

The hot economies of the last decade — the emerging markets of Brazil, Russia, India and China collectively known as the "BRICs" — will likely grow in 2015 at their slowest pace in six years, according to Oxford Economics, a forecasting firm. Falling oil and commodity prices have smacked Brazil and Russia particularly hard.

China may expand 6.5 percent or more. Yet that's a far cry from the nearly double-digit growth it enjoyed for decades. Europe and Japan will be lucky to expand even 1 percent.

The gap between the U.S. and the rest of the world reflects a fundamental trait of the U.S. economy: It's more insulated from the rest of the world's ups and downs than other major economies are. Exports account for just 14 percent of U.S. output, the smallest share among the 34 mostly rich members of the Organization for Economic Cooperation and Development.

One U.S. company largely protected from overseas trends is Globe Specialty Metals, a Miami-based producer of silicon metals that draws 90 percent of its revenue from North America. Its silicon is added to aluminum and rubber parts used in cars, and robust auto sales have boosted the company's revenue.

CEO Jeff Bradley says he's optimistic about 2015. As gas prices have sunk, Americans have been buying more SUVs and pickups, which use more aluminum. Demand for solar power panels is also lifting sales.

"Things are lining up for next year to be one of the best years in the history of our company," Bradley said.

In the United States, consumers are the main drivers of growth. And fortunes are looking up for more households. Employers are on track to add the most jobs in 15 years in 2014. As a percentage of income, Americans' debt has dropped to 2002 levels.

In some ways, the U.S. economy actually benefits from slower growth abroad. Investors in search of safety have plowed money into Treasurys, thereby helping hold down inflation and U.S loan rates, including for mortgages. Lower rates, in turn, could fuel more home sales and construction next year.

Stan Humphries, chief economist at Zillow, thinks Americans ages 25 to 34, stung by higher rents, will buy homes in greater numbers by the end of 2015. Mortgage giants Freddie Mac and Fannie Mae have relaxed their down payment requirements, which were a strain for younger would-be buyers. Humphries also thinks developers will build more lower-priced homes that millennials can afford.

Some signs of hope overseas have emerged. Falling oil prices should benefit people in Europe, Japan and China, all of which import oil. And analysts expect the European Central Bank to ramp up its stimulus efforts, possibly by buying government bonds. That step would inject more cash into the economy to boost lending and keep rates low.

The global economy's biggest wild card next year might be Japan. It slid into recession last quarter after a sales tax hike hammered consumer spending. Prime Minister Shinzo Abe has delayed a second increase to 2017.

Japan's central bank is buying government bonds and other financial assets in a bid to boost inflation and stimulate growth. Yet so far, wages haven't risen in line with prices, thereby threatening consumer spending.

Masaaki Ogawa, a third-generation vegetable shop owner on Tokyo's downtown Sugamo shopping street, is among many who feel frustrated.