A clothing manufacturer went public Thursday with worries that a Kentucky factory could be forced to close, idling about 100 employees, because the federal government is considering letting prisoners do the work. 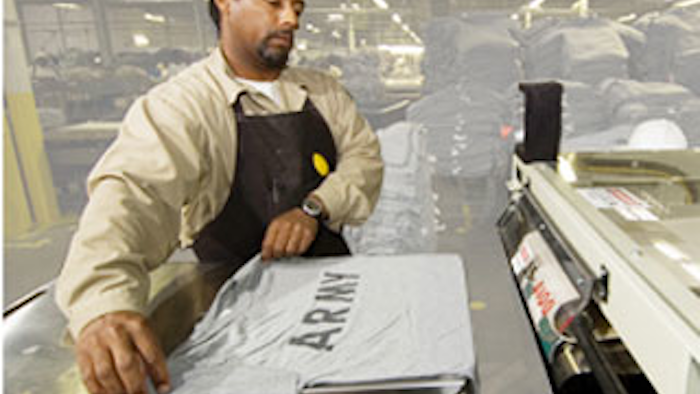 FRANKFORT, Ky. (AP) — A clothing manufacturer went public Thursday with worries that a Kentucky factory could be forced to close, idling about 100 employees, because the federal government is considering letting prisoners do the work.

Ashland Sales and Service Co. President Michael Mansh said Federal Prison Industries is vying for a contract to make Air Force windbreakers that his firm has produced since 1997.

Mansh told The Associated Press that loss of the military contract would doom the factory in the small northeastern Kentucky city of Olive Hill.

"I'm looking at this as I'm David and they're Goliath," Mansh said. "The plant's been there for over 50 years. It's done military contracting for its entire existence. Is this fair to my workers, some of them who have been there for 30-plus years, to have a government entity to come in and take the work away from us and close the plant down?"

Senate Republican Leader Mitch McConnell criticized the Obama administration for considering awarding work to prisoners even though it would cost jobs on the outside.

"I was stunned to hear the news that the Obama Administration is threatening the future of the largest employer in Olive Hill," McConnell said in a statement. "With Kentucky's unemployment still above 9 percent, now is not the time for this administration to start looking for ways to pay convicts to take law-abiding, taxpaying Kentuckians' jobs."

Federal Bureau of Prisons spokeswoman Traci Billingsley said Thursday that Federal Prison Industries is interested in the contract for the windbreakers.

"At this time, it is not clear whether FPI will be providing this item," she said.

"They can quote any price they want," he said. "Their labor is almost free."

Olive Hill Mayor Danny Sparks said loss of the factory would be devastating, especially in a community where nearly one in 10 workers is unemployed.

"We can't afford to lose one job, much less the possibility of 100," Sparks said. "That's not fair to our community."

That the jobs might to prisoners is even more bothersome.

"That wouldn't sit well with this community," Sparks said. "I don't want to sit back and wait for that to happen. We want to make sure that doesn't happen."