Rare Element Resources promises high-wage jobs and economic vitality to an area where 40 percent of the population is age 50 or older. 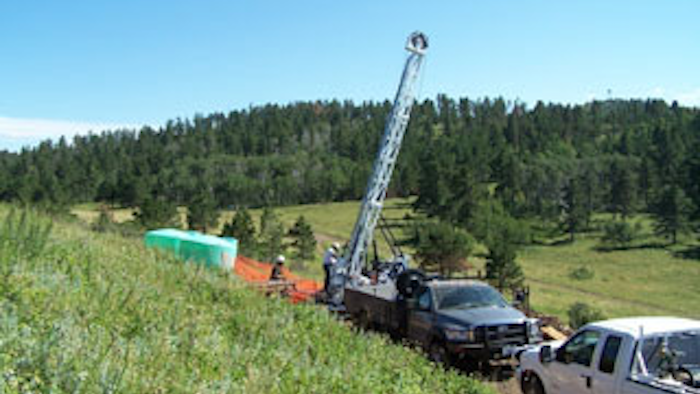 SUNDANCE, Wyo. (AP) — To get a bird's-eye view of the proposed rare earth elements mine, drive north of Sundance on Highway 14, turn east on Warren Peak Road and head to the Black Hills.

Snow prohibits travel to the site, but you can climb up the lookout tower on Warren Peak where, at 6,656 feet, you can see pine trees and mountains for miles — all the way to Nebraska, Montana, North Dakota and South Dakota.

Bull Hill is the name of a peak and a proposed surface mine.

If approved, the Bull Hill mine will change that view.

The company that wants to build and operate the mine, Rare Element Resources Ltd., promises high-wage jobs and economic vitality to an area where 40 percent of the population is age 50 or older.

But longtime ranchers worry about traffic, water quality and a change of the pace of life.

"We don't want it," said rancher Diane Marshall, teary-eyed, at a recent meeting with the company. "It's going to devalue our property. We have the risk of whatever radioactive stuff. It will totally ruin our way of life."

Regardless of opinions about the mine, one truth holds: It will forever change the landscape.

About 7,000 people live in Crook County, and almost 200 of them showed up at a meeting on a recent Monday night with Rare Element Resources executives, who traveled to northeastern Wyoming from the company's Denver area offices.

"The biggest concern is, will there be any pollution as a result of this mine?" said Sundance physician Janice Lumnitz before the meeting. "The big advantage would be more jobs and more people coming into town, making it a more stable town."

The company's executives made their case for the mine from a personal and patriotic standpoint, although Rare Element Resources is officially registered in British Columbia, Canada.

"When we mine it and when we add those additional high-paying jobs that have left the United States and have gone to China, the U.S. economy will continue to grow effectively," said George Byers, the company's vice president of Government and Community Relations. "We believe the project is an exceptional opportunity to meet those objectives. And we're really committed."

The extraordinary attention given to minerals considered rare has to do with demand.

"Rare earths" are 15 elements at the bottom of the Periodic Table of Elements, including neodymium, praseodymium, europium, lanthanum and cerium.

The elements are important to the stuff we buy in the modern economy: cellphones, laser-guided missile defense systems, color TVs and hybrid vehicles.

For instance, neodymium, which has been found on Bull Hill, is used to make the strongest permanent magnets known. The magnets are widely used in microphones, loudspeakers, headphones, computer hard disks, wind turbine generators and jet engines. Toy magnets like Bucky Balls are neodymium magnets.

What's rare about rare earths is a presence in high enough quantities and low enough radioactivity to justify opening a mine. That's what the people at Rare Element Resources believe they've found in the mountains above Sundance.

Additionally, there's a skilled and trained workforce that have driven trucks and repaired conveyor belts in Campbell County coal mines — a workforce from which the company will draw when the mine opens.

The company plans to employ 159 people, including 102 workers at the mine site as haul truck drivers and machinists. People for some technical positions like geologists and engineers may have to be recruited from outside the area.

The company would pay an estimated $25 million a year in severance and ad valorem taxes if the mine opens.

Company executives say the mine could open by the end of 2015.

Scientists have been poking around the hills for years, since before Mikkelina Swenson was born.

She's now 30 and dead set against the mine.

Swenson knows she's lucky to have grown up in some of the prettiest country in the United States, an appreciation she learned as a child when her grandfather made her eat lunch each day outside on his porch, where she could stare out at the big Wyoming skies, the idyllic pastures and the hills blanketed with the coniferous trees.

After high school, she left and lived in Laramie and Rapid City, S.D., but in March she returned home. She's finishing a business degree from Black Hills State University and hopes to run the Swenson Ranch, a beef cattle operation now owned by her parents, John Daniel and Verda Swenson.

The Swenson Ranch interfaces with the proposed mine on two fronts: at their summer and winter grazing lands.

Important parts of the mine — offices, maintenance buildings, the crusher and "physical upgrade" plant where the ore will be filtered into a "pre-concentrate" sandy material — are planned on the side of Bull Hill that Swenson's family leases from the U.S. Forest Service for summer grazing.

Swenson's great-grandfather was a homesteader in Sundance. Her grandfather bought additional land three miles south of town along state Highway 116. It is a winter pasture for the cattle and site of Swenson's and her parents' homes.

Enclosed cement-type trucks that limit dust will transport the pre-concentrate rare earths past the Swenson Ranch's winter range to Upton.

Swenson describes her feelings as nostalgic — not for the past but the present life that she's afraid will become a memory.

"I think it will change the speed of life," she said. "You look around and you enjoy the scenery and I think that will change."

Rancher Lance Marshall isn't anti-mining. He works on a drag line at Black Thunder mine in Campbell County, one of the largest surface coal mines in the world.

His parents bought their ranch 15 years ago, and he bought it from them about five years ago. Together, the family tends to the ranch.

Marshall and his parents live in a quiet and peaceful valley that gets a lot of snow in the winter.

For easy access, most of the houses in the valley were built near the curvy, county lane, Miller Creek Road.

Rare Element Resources would need to straighten and widen an 8-mile section of Miller Creek Road to accommodate the cement trucks. The company said only a handful of trucks would traverse that road each day.

But Marshall knows from experience that mines sometimes increase production. Rare Element Resources is testing nearby areas for rare earths.

"We could be looking at 20 trucks a day," Marshall said.

From the mine, the route to the Upton hydrometerllurgical plant is about 40 miles. It's near a BNSF Railway Co. route.

"Because of the chemical strength, it would be safer to bring the plant to the chemicals, to the rail," said Jaye Pickarts, Rare Element Resources' chief operating officer.

At the "hydromet" plant, the rare earths will be further processed.

The processing involves a hydrochloric acid solution and heat. Iron, calcium and manganese are removed and with soda ash, the rare earths become a carbonate, which will be loaded onto the train to a yet undetermined location for separation and sale.

Ranchers in the area are starting to talk with environmental groups and may seek the advice of attorneys.

Advocates like Nancy Hilding, president of the Prairie Hills Audubon Society in South Dakota, hopes that the Sundance-area residents are well-informed. Residents of the South Dakota side of the Black Hills have more of experience with mines, she said.

Hilding ticked off the U.S. Environmental Protection Agency Superfund sites in the Black Hill of South Dakota, including the Gilt Edge mine, Ellsworth Air Force Base and Whitewood Creek. Superfund sites are places that have been abandoned and contain hazardous waste.

Not all shuttered mines end up as Superfunds.

The vast majority of today's mining companies pay bonds to the government as a sort of insurance in case they go out of business, sticking the public with the bill for environmental cleanup.

Hilding said the amount of bonding needs to be sufficient.

"You've got to watch the bonding," she said.

Hilding wants the ranchers to learn about the Mountain Pass mine. The mine, in California's Mojave Desert, closed more than a decade ago after radioactive wastewater leaked outside a chemical processing plant and the prices of Chinese rare earth imports decreased.

"The Mountain Pass mine is the quintessential rare earths mine," she said. "There's all sorts of problems with that."

It was the last open rare earths mine in the United States and has a new owner, Molycorp Inc., that wants to restart production. It likely will be the first rare earths mine to open in the country during a time when numerous companies are considering getting into the rare earths business.

At the Bull Hill mine, there will be a low-grade stockpile and mine waste piles. Mining tailings will be at the hydromet plant in Upton.

Rare Element Resources' executives said environmental disasters are bad for business. They can shut down production and be costly to clean up.

"We are committed to the environment," said Byers, the company's vice president. "It's important. We want to make sure this facility is part of the community and we are neighbors. We will conduct the operation to ensure the risks are identified, assessed, mitigated and managed."

Since the company will mine on public land, ranchers, environmentalists and others are allowed to submit public comments to the U.S. Forest Service.

"There will be many comment periods," Byers said. "We encourage the community to attend and give your feedback."

The feedback and comment periods will start when the Forest Service beings its environment impact study, which will last more than a year.

On Friday, the company submitted a document detailing the plan of operations.

The Forest Service will review it and begin soon the environmental study.