The two sides are set to resume talks Friday after the union asked a federal mediator to help end the contract dispute. 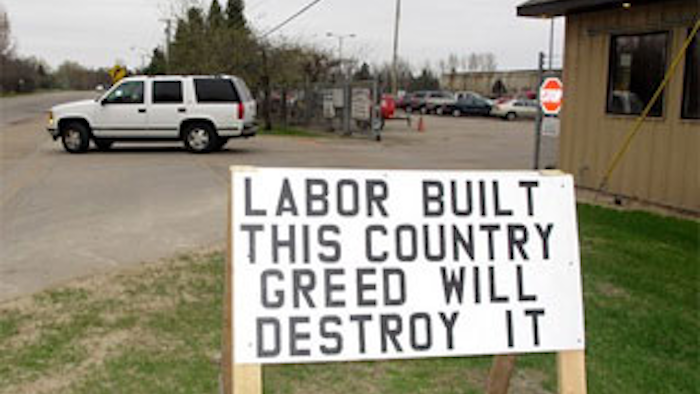 FARGO, N.D. (AP) — Locked-out union workers at American Crystal Sugar Co. are in the middle of a 200-mile trek to the negotiating table, and the company says it could be a long walk for a short meeting.

The two sides are set to resume talks Friday after the union asked a federal mediator to help end the contract dispute. It has been more than 10 months since the lockout started and more than four months than the two sides last met.

The lockout affects about 1,300 union workers at the company's sugar beet processing plants in North Dakota, Minnesota and Iowa. The plants have been operating with replacement workers.

Union members are trying to highlight their cause by hiking and camping between locations in the Red River Valley where the company's sugar beet processing plants are located. The group expects to reach the company's home base in Moorhead, Minn., on Wednesday.

Union spokesman John Riskey said he and the other walking workers have received warm greetings along the way, but he wouldn't predict what kind of reception the union would receive at the bargaining table.

"Our hope is that Crystal Sugar will come to the table and cooperate and negotiate and stay at the table until we get this resolved," Riskey said Monday. "Guess we will have to see when the time comes."

Brian Ingulsrud, a Crystal Sugar vice president, said the company isn't changing its position and it would be a short session if the union doesn't change its stance.

"We're going to continue to stand by our final offer, which has an increase in wages and a very competitive benefits package," Ingulsrud said. "It's been proven to be a good package in that is has attracted a lot of good replacement employees."

Crystal Sugar, the largest beet sugar processor in the country, has offered about a 14 percent pay increase over five years and is promoting increased pension, leave and vacation benefits. Workers are mostly upset about provisions covering job security and seniority.

Ingulsrud said the only thing that has changed since the last meeting is that the company's costs for replacing the union workers have gone down.

"Our shareholders have given us the message that they really want us to stand by our final offer," he said.

Riskey said the union's journey through Crystal Sugar towns has shown how much pain the lockout has caused.

Longtime Minnesota state Rep. Morrie Lanning, of Moorhead, said the longer the lockout goes on, the less likely it appears there will be a solution.

"This long-lasting labor strife here is not good for anybody," said Lanning, who announced last week he would not run for re-election. "I sure hope they can come to some kind of resolution."