Employers in April posted the fewest job openings in five months, suggesting hiring will remain sluggish in the months ahead. 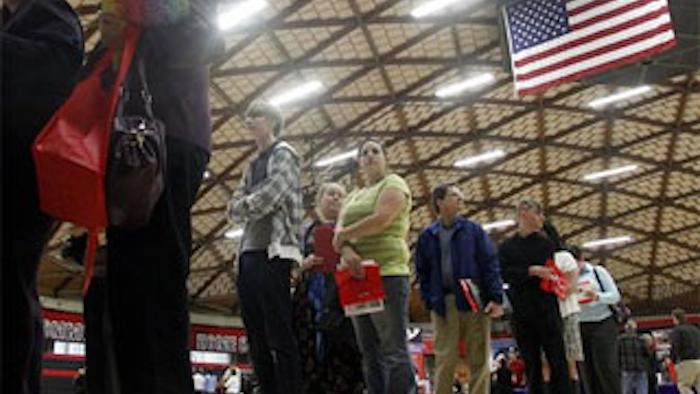 WASHINGTON (AP) — Employers in April posted the fewest job openings in five months, suggesting hiring will remain sluggish in the months ahead.

The Labor Department said Tuesday that job openings fell to a seasonally adjusted 3.4 million in April, down from 3.7 million in March. The March figure was the highest in nearly four years.

The decline could mean employers are growing more cautious about adding workers in the face of financial turmoil in Europe and slower growth in the United States. Job openings can take one to three months to fill.

There were 12.5 million unemployed people in April. That means there was an average of 3.7 people competing for each open job. In a healthy job market, the ratio is usually around 2 to 1.

Openings have risen by almost a third since the recession ended in June 2009. But they are still below pre-recession levels of about 5 million per month.

April's decline in openings has coincided with a sharp slowdown in hiring. Employers added an average of only 73,000 jobs in April and May. That's down from an average of 226,000 in the first three months of this year.

The drop in openings was concentrated in the private sector, and was particularly steep in professional and business services. Available jobs fell 14 percent in that category, which includes high-paying jobs such as engineers, architects and accountants, as well as lower-paying temporary jobs.

Fewer people quit their jobs last month. That's a pessimistic sign, since more quits are evidence that workers are confident that they can find new jobs elsewhere.

Employers hired 4.18 million people in April, 160,000 fewer than the previous month. The Labor Department's report measures gross job gains, while the monthly jobs reports are net figures that are calculated after subtracting layoffs and quits.

Nearly 4.1 million people were laid off, quit or retired in April. When that number is subtracted from the gross hiring figure, the total is close to the 77,000 net job gains in April reported earlier this month by the Labor Department.

Companies are posting more job openings but aren't necessarily filling them. Openings have increased by 13 percent in the past year, while gross hiring has increased only 4 percent.