Angry Workers Unite On May Day

Workers around the world united in anger during May Day rallies Wednesday — from fury in Europe over years of austerity measures that have cut wages, reduced benefits and eliminated many jobs altogether, to rage in Asia over relentlessly low pay, the rising cost of living and hideous working conditions that have left hundreds dead in recent months alone. 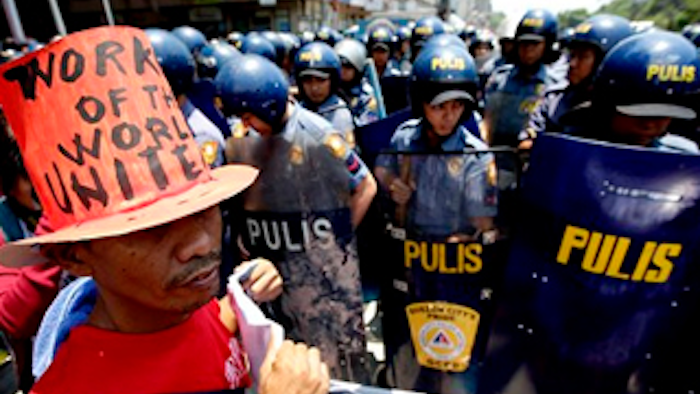 ISTANBUL (AP) — Workers around the world united in anger during May Day rallies Wednesday — from fury in Europe over years of austerity measures that have cut wages, reduced benefits and eliminated many jobs altogether, to rage in Asia over relentlessly low pay, the rising cost of living and hideous working conditions that have left hundreds dead in recent months alone.

In protests, parades, strikes and other demonstrations held in cities across the planet, activists lashed out at political and business leaders they allege have ignored workers' voices or enriched themselves at the expense of laborers during what has been a difficult few years for the global economy. In some places, the demonstrations turned violent, with activists clashing with police.

The pain was especially fresh in Bangladesh, where the collapse last week of an illegally built eight-story facility housing multiple garment factories killed more than 400 in a Dhaka suburb. The building collapse followed a garment factory fire in November that killed 112 people in the country, and it has increased the pressure on the global garment industry to improve working conditions.

A loud procession of thousands of workers wound through central Dhaka on Wednesday. Many waved the national flag and demanded the death penalty for the now-detained owner of the doomed building. From a loudspeaker on the back of a truck, a participant spoke for the throngs gathered: "My brother has died. My sister has died. Their blood will not be valueless."

The Bangladesh tragedy drew a denunciation from Pope Francis as he addressed worshippers at a private Mass at the Vatican. He blasted what he called the "slave" wages of those who died, many of whom were being buried Wednesday as other bodies were still being pulled from the rubble. Francis criticized the focus on "balance books" and personal profit that he said are tied to the failure to pay workers fair wages.

In Greece and Spain, increasing numbers of people are losing their jobs as governments grappling with a debt crisis have been cutting spending, raising taxes and pursuing other stinging austerity measures. Both countries have unemployment rates hovering just above 27 percent.

Unions in Greece held a May Day strike that brought ferry and train services to a halt, and organized peaceful protest marches through central Athens. The country, which nearly went bankrupt in 2010, is now in its sixth year of a deep recession and is dependent on international bailout loans.

While the austerity drive has succeeded in reducing high budget deficits, it has been at a huge cost: under the terms of its latest loan disbursement, Athens has agreed to sack about 15,000 civil servants through 2014.

"We are here to send a message to ... those in power in Europe, that we will continue our struggle against unfair, open-ended policies that are destroying millions of jobs on a national and European level," said Kostas Tsikrikas, leader of Greek public sector labor union ADEDY.

More than 100,000 Spaniards infuriated by austerity measures and economic recession took to the streets of some 80 cities in trade union-organized rallies Wednesday, with the largest protests in Madrid, Barcelona and Bilbao.

Under banners reading "Fight for your rights," union leaders Ignacio Fernandez Toxo of Workers Commissions and Candido Mendez of the General Workers Union called on the government to reverse its austerity drive and urged politicians to agree an all-party economic plan aimed at creating jobs.

The square is the city's main hub and is undergoing a major facelift. Authorities banned celebrations at Taksim this year, citing construction safety risks, and partially suspended public transport services to prevent large gatherings there. But trade unions had vowed to mark May Day in Taksim, which has symbolic importance because dozens of protesters were killed there in 1977 when unidentified gunmen opened fire on May Day celebrators.

"Taksim is our sacred venue. Open it up to the workers!" demanded Kani Beko, leader of a major labor union confederation.

Danish Prime Minister Helle Thorning-Schmidt became a target of both booing and a water pistol during a May Day parade in her country, where some believe that she has been leaning too far to the right to uphold the goals of her leftist Social Democratic Party.

Boos and whistles from protesters forced Thorning-Schmidt to abort her speech to thousands at the gathering in Aarhus, some 200 kilometers (125 miles) northwest of Copenhagen. Then, as she was walking to her car, a man squirted water on her with a water pistol. Police spokesman Carsten Dahl said police had detained the 23-year-old man, but the premier was not injured.

Swedish police said seven people were arrested and five were injured as counter-demonstrators tried to interrupt a May Day parade by right-wing extremists in the southern city of Jonkoping. Police spokesman Goran Gunnarsson said 60 others were briefly detained as officers tried to keep the two sides apart.

In Indonesia, the world's fourth-most populous country, tens of thousands of workers rallied for higher pay and other demands. Some also carried banners reading: "Sentence corruptors to death and seize their properties" to protest a proposal for the government to slash fuel subsidies that have kept the country's pump prices among the cheapest in the region.

In the Philippines, an estimated 8,000 workers marched in Manila to also demand better pay and regular jobs instead of contractual work. Some rallied outside the U.S. Embassy, torching a wooden painting stamped with the words "low wages" and "union busting" that depicted Philippine President Benigno Aquino III as a lackey of President Barack Obama.

More than 10,000 Taiwanese protested a government plan to cut pension payouts to solve worsening fiscal problems, saying it reflects a longstanding government policy to bolster economic growth at the expense of workers' benefits. Analysts say poor income levels have forced many young Taiwanese to share housing with their parents and delay marriages.

And in Cambodia, more than 5,000 garment workers marched in Phnom Penh, demanding better working conditions and a salary increase from $80 to $150 a month. About a half million people work in the country's $4.6 billion garment industry, which makes brand name clothes for many U.S. and European retailers.