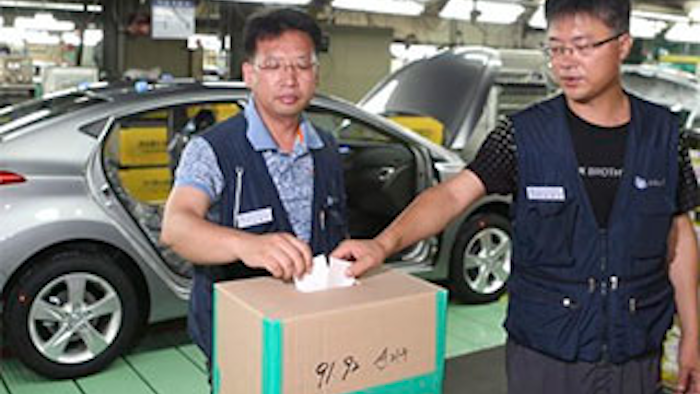 Kwon said 46,000 Hyundai workers will determine the extent of the strike early next week. Kia's 30,000 workers are taking a similar step.

Hyundai said it had offered to resume talks with the union on Friday.

"We regret that the union has begun preparations to strike despite the company's proposal to outline its offers in the next round of talks. There are also many aspects of the union's demands that are hard to accept from the company's point of view," Hyundai said in a statement.

Kwon said Hyundai's proposal was insincere and short of a full response to the union's demands.

Hyundai and Kia, which together form the world's fifth largest automaker, have been plagued by disputes with their unions for the past two years.

Hyundai's latest earnings were hit by its union's refusal to allow overtime for three weeks earlier this year and by the rising popularity of foreign cars in South Korea. European and U.S. carmakers lowered prices after free trade deals took effect. The maker of the Elantra said the industrial action resulted in lost output of 83,000 vehicles worth 1.7 trillion won ($1.5 billion).

The company estimated it lost production of 82,000 vehicles worth 1.7 trillion won due to 92 hours of walkouts by workers in 2012.