The number of Americans seeking unemployment benefits plummeted last week 31,000 to a seasonally adjusted 292,000. But the drop was mostly because of technical issues in two states that delayed the processing of applications. The Labor Department said Thursday that the less volatile four-week average fell to 321,250, the lowest in six years. 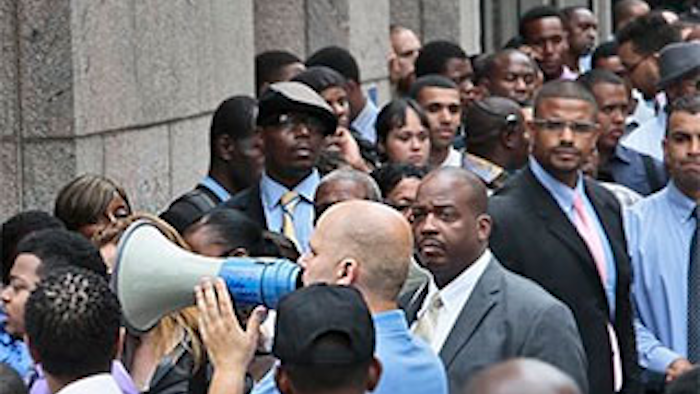 WASHINGTON (AP) — The number of Americans seeking unemployment benefits plummeted last week 31,000 to a seasonally adjusted 292,000. But the drop was mostly because of technical issues in two states that delayed the processing of applications.

The Labor Department said Thursday that the less volatile four-week average fell to 321,250, the lowest in six years.

A government spokesman says the steep drop occurred because two states upgraded their computer systems last week and did not process all their applications. "This is not necessarily an indication of a change in labor market conditions," he said.

The spokesman would not identify the states, but said one was small and one large. Big states like California and Texas can swing the weekly data by 10,000 or more.

Applications will likely rebound in the coming weeks, he said.

The broader trend in unemployment benefit applications has been favorable. Prior to the glitch applications had dropped 7 percent in the previous three months. However, the decline in jobless claims has not been followed by rapid hiring.

"It's hard to believe that claims can keep declining indefinitely without a commensurate pickup in job growth," said Dan Greenhaus, chief global strategist at BTIG. "Then again, that's exactly what they have done."

Applications are a proxy for layoffs. Layoffs have been falling since 2009 and in July reached the lowest level on records dating back to 2000, according to a separate government report released this week.

But unemployment remains painfully high at 7.3 percent more than four years after the Great Recession ended. And the economy grew at a modest 2.5 percent annual rate in the April-June quarter.

That's made the unemployment applications data less reliable for predicting job growth than in past recoveries.

Historically, falling applications have pointed to a pickup in hiring and stronger economic growth.

JPMorgan economists point to the October-December quarter in 2004, just three years after the 2001 recession ended. Unemployment applications were down to 329,000, in line with the current level reported over the past four weeks. Yet the unemployment rate was 5.4 percent and the economy grew at 3.4 percent annual rate.

Applications were also at 329,000 in the fourth quarter of 1994, three years after the 1991 recession ended. The unemployment rate was 5.6 percent then, and the economy grew at a 4.6 percent annual rate.

"The ongoing drop in ... claims has not shown its normal relationship to job growth," Greenhaus said.

Still, hiring has been steady this year. Employers added 169,000 jobs in August, although job growth in June and July were weaker than first estimated. The economy has added an average of 180,000 jobs a month this year.

About 4.3 million people received unemployment benefits in the week ended Aug. 24, the latest figures available. That's about 125,000 fewer than the previous week. A year ago, nearly 5.4 million people were receiving benefits.