The uncertainty and weakness that hung over the U.S. job market in September before the government shut down aren't going away. 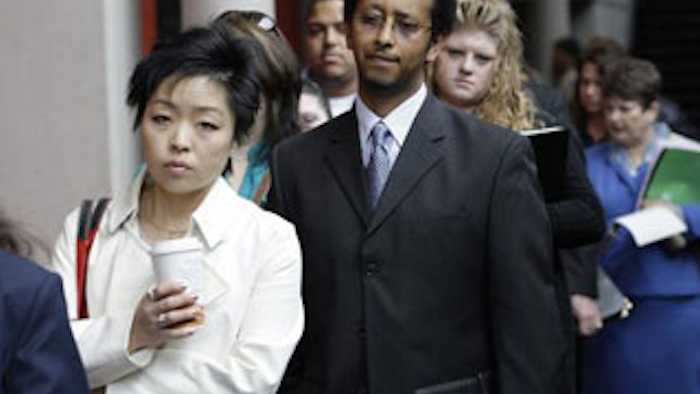 WASHINGTON (AP) -- The uncertainty and weakness that hung over the U.S. job market in September before the government shut down aren't going away.

Employers will likely remain slow to hire as long as the economy struggles to accelerate, consumers limit their spending and Congress keeps putting off a resolution to a budget fight that will resurface early next year.

Just a few months ago, many economists predicted that hiring would pick up by year's end as the effects of tax increases and government spending cuts that kicked in this year faded.

No longer. The September jobs report made clear that hiring isn't strengthening. It's slowing.

"We had assumed that the headwinds would dissipate, but in fact they didn't," says Doug Handler, an economist at IHS Global Insight.

What's more, the 16-day partial shutdown of the government, which began Oct. 1, will likely further depress hiring for October. That's because government contractors and other companies affected by the shutdown imposed temporary layoffs.

And the budget battles that led to the shutdown are likely to flare up later this year and in early 2014. Last week, Congress agreed to keep the government running only until Jan. 15 while President Barack Obama and Congress seek a broader budget agreement.

In the meantime, uncertainty about another budget impasse — and potentially another government shutdown — may cause some businesses to hold off on hiring or expanding.

"Companies are not feeling confident enough to expand, to hire, to invest," said Yelena Shulyatyeva, an economist at BNP Paribas. "They're just sitting on the sidelines, being cautious, and watching all these headlines from Washington."

Consider Patrick Shrader, vice president of Arundel Manufacturing, based near Portland, Maine. Shrader said the uncertainty and brinkmanship in Washington have led his company to postpone hiring.

"As soon as we think the dust is settled, and we're ready to move forward, there's something else," he said.

The company has enough work to support up to 10 hires, on top of its current staff of 80, Shrader says. But it isn't ready.

"We're not prepared to bring anybody else on board until we figure out what's going on after Jan. 15," he said.

Even as hiring and economic growth have remained tepid in recent months, the stock market has been roaring. Two key reasons: The Federal Reserve's policies have kept long-term interest rates so low that many investors have shifted out of low-yielding bonds and into stocks, thereby driving up stock prices. And corporations have managed to deliver steady profit growth, in part by keeping costs down.

The burst of hiring earlier this year was probably unsustainable without a faster economy, said Sophia Koropeckyj, an economist at Moody's Analytics. While companies were adding jobs at a healthy pace in the first six months of the year, the economy was expanding at a meager annual rate of 1.8 percent. Brief periods of robust job gains have raised hopes only to fizzle.

The weak economic growth appears to have caught up with employers. They're now adding fewer jobs. That's been particularly noticeable among companies that depend on consumers, like restaurants and retail chains.

A category that includes hotels, restaurants and entertainment companies, such as amusement parks, has added just 5,000 jobs over the past three months. That's down from 146,000 over the previous three months.

Retailers are still hiring. But the 21,000 positions they added in September were the fewest in six months.

The slowdown may reflect an ongoing response to the tax increases that took effect this year, Koropeckyj said. Americans are taking home less pay because of a 2 percentage point increase in Social Security taxes. A person earning $50,000 a year has about $1,000 less to spend this year. A household with two high-paid workers has up to $4,500 less. Income taxes for upper-income households also rose.

Consumer confidence plummeted during the government shutdown to the lowest level in nearly two years, according to Gallup. And pay raises have been slight: Average hourly pay rose just 2.1 percent in September from 12 months earlier. That's barely keeping up with historically low inflation.

In the meantime, the still-tight job market has discouraged many Americans from seeking jobs. The percentage of Americans who are working or looking for work remained at a 35-year low last month.

That helps explain why the unemployment rate dipped to a still-high 7.2 percent in September from 7.3 percent in August. The government doesn't count people without a job as unemployed unless they're looking for one. The drop in unemployment from 7.9 percent at the start of the year has occurred mainly because many people aren't actively seeking jobs.