The fund, estimated at $40 million, would compensate injured workers and dependents of those of who died, according to a statement by the organizers of the fund. 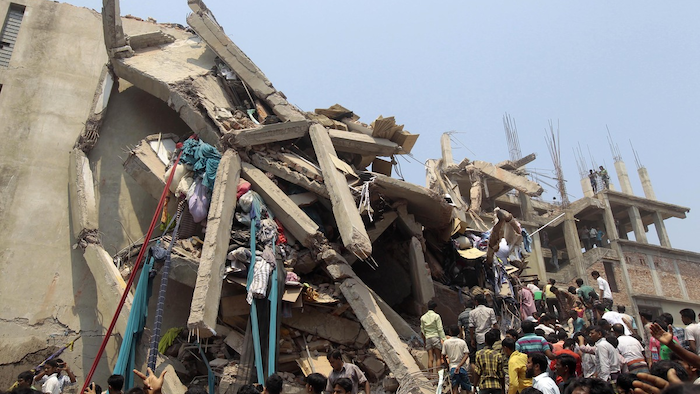 DHAKA, Bangladesh (AP) — A compensation fund to benefit the victims of an April factory building collapse in Bangladesh that killed more than 1,100 people is being created.

The fund, estimated at $40 million, would compensate injured workers and dependents of those of who died, according to a statement by the organizers of the fund.

Spanish retailer El Corte Ingles, UK's Bonmarche, Canada's Loblaw and the Dublin-based Primark have pledged to contribute to the fund.

The illegally constructed, 8-story Rana Plaza collapsed on April 24 as thousands of people worked inside in five garment factories. The collapse was the deadliest disaster to hit Bangladesh's garment industry, which is worth $20 billion annually and supplies global retailers.

The collapse highlighted how harsh and unsafe conditions can be for many of the country's 4 million workers working in the world's second-largest garment producing country after China.

It came as a shocking wake-up call for Bangladesh and global retailers, which prefer the South Asian country for cheap labor. The collapse took place five months after a devastating fire killed 112 people in another garment factory that was engaged in producing clothes for retailers including Wal-Mart.

An official of the Bangladesh Garment Manufacturers and Exporters Association welcomed the decision.

"This is a great move, we appreciate it," Shahidullah Azim, a vice president of the association, told The Associated Press on Tuesday.

"The retailers are very important stakeholders," he said.

Azim said the association in collaboration with the government provided financial support to the families which lost their loved ones and the injured, but they need more support.