The Republican governor said he is seeking 50,000 work visas solely for the city over five years. The type of visas involved are not currently allocated by region or state, but rather go to legal immigrants who have advanced degrees or show exceptional ability in certain fields. 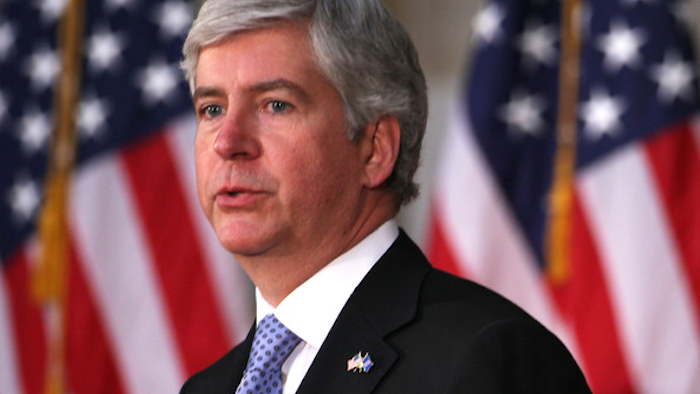 DETROIT (AP) — Michigan Gov. Rick Snyder announced a plan Thursday to ask the Obama administration to set aside thousands of work visas to entice talented immigrants to live and work in bankrupt Detroit.

The Republican governor said he is seeking 50,000 work visas solely for the city over five years. The type of visas involved are not currently allocated by region or state, but rather go to legal immigrants who have advanced degrees or show exceptional ability in certain fields.

Under the governor's unique proposal, one-quarter of the nation's 40,000 annual EB-2 visas would be designated for such immigrants willing to live and work for five years in Detroit — a city amid the largest municipal bankruptcy in U.S. history whose neighborhoods have been hollowed out by a long population decline.

"Let's send a message to the entire world: Detroit, Michigan, is open to the world," Snyder said during his news conference, which came a day after he backed plans to commit as much as $350 million in state funds to help shore up Detroit pension funds and prevent the sale of valuable city-owned art.

Snyder unveiled the immigration plan at the offices of the IDEAL Group, a family-owned manufacturing and construction company in Detroit whose founder is the grandson of Mexican immigrants. Mayor Mike Duggan, city council members and other community leaders attended.

In an interview Wednesday, the governor told The Associated Press that the proposal would require no federal financial bailout.

"This involves working with immigration rules and visa limits," he said. "Here's a non-cash way to significantly accelerate the comeback of Detroit. Why wouldn't this be a great thing?"

Snyder spokeswoman Sara Wurfel said his administration plans to submit the "groundbreaking" request to the federal government this week if possible.

Snyder has routinely touted immigration as an economic driver, citing statistics that immigrant entrepreneurs start many small businesses and file patents at twice the rate of U.S.-born citizens. His office says immigrants created nearly one-third of the high-tech businesses in Michigan in the last decade, third in the nation.

The governor specifically is trying to find flexibility in a waiver that allows foreign workers with a master's degree or higher — or who demonstrate exceptional skills in science, business or art — to come to the U.S. if it is in the "national interest." The waiver is available if an applicant does not have a job or if a prospective employer cannot show that there are no qualified U.S. citizens to fill the position.

Snyder wants to broaden the definition of national interest to apply it to the geographic area of downtrodden Detroit, likening the concept to one already in place where foreign-born physicians can get a green card after working in an underserved area for five years.

Snyder is especially keen on keeping foreign students in Michigan who have advanced degrees in science, technology, engineering or math.

"A lot of those folks come get their degrees, we give them a world-class education and we tell them to get out," he said.

In his annual State of the State address last week, he announced a plan to join two other states in putting immigration services under a special office and a separate initiative to make Michigan the second state to run a regional EB-5 visa program to attract immigrant investors for development projects.

Business leaders and others applauded the effort despite some criticism from a leading Democrat who said Snyder should focus on educating in-state residents rather than importing degree holders.

Steve Tobocman, director of the Global Detroit initiative, which aims to make the region friendlier to immigrants, said Snyder is someone who knows "how powerful immigration can be for our economy."