California's minimum wage will rise to $9 an hour when a new law takes effect this week and provides workers with the first such increase since 2008. 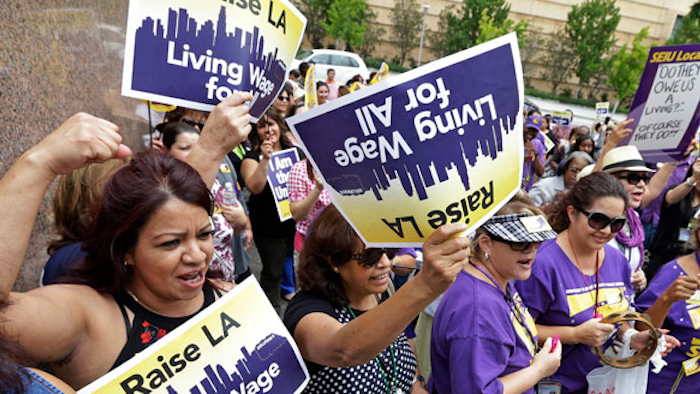 SACRAMENTO, Calif. (AP) -- California's minimum wage will rise to $9 an hour when a new law takes effect on Tuesday and provides workers with the first such increase since 2008.

That amount will increase again to $10 an hour starting on Jan. 1, 2016, under AB10, which Gov. Jerry Brown signed into law last fall.

"This first modest increase will help put more money in the pockets of hardworking Californians to provide food, clothes and housing for their families," Assemblyman Luis Alejo, D-Salinas, said in a statement.

AB10 is one of several laws that take effect in July. Others will provide additional protections to victims of domestic violence, expand the state's paid family leave program, and give tax breaks to manufacturers.

California's minimum wage increase comes amid a national debate about low-wage workers who have seen their purchasing power decline in recent years.

President Barack Obama has pushed Congress to raise the federal minimum wage to $10.10 an hour, but the proposal hasn't gained much traction. Instead, he has encouraged cities and states to raise those wages on their own.

New York City, Chicago, San Francisco and Oklahoma City are among the municipalities debating minimum wage increases. In early June, the Seattle City Council voted to raise the minimum wage within the city to $15 an hour, starting next April and phasing in over several years.

Currently, the highest minimum wage in the country is in SeaTac, a Washington state town of about 25,000 that is home to Seattle-Tacoma International Airport. The $15-an-hour minimum wage approved by voters took effect in January for workers at major hotels and parking lots, and the state Supreme Court will decide whether it also applies to workers at the airport, which is run by a separate authority.

Washington has the highest minimum wage of any state at $9.32 an hour.

In California, a bill that would have raised the state's minimum wage even higher and tied it to inflation failed in the Legislature this year.

Other bills that take effect Tuesday include:

— AB93 and SB90 allow manufacturers and certain researchers and developers to obtain a partial exemption of sales and use tax equal to 4.2 percent on some manufacturing and equipment purchases through July 1, 2022. The measures were authored by Sens. Cathleen Galgiani, D-Stockton, and Anthony Cannella, R-Ceres.

— AB161 permits a court, when issuing a domestic violence restraining order, to restrain one party from changing insurance coverage. It was authored by Assemblywoman Nora Campos, D-San Jose.

— AB218 says state and local government agencies must determine a job applicant's minimum qualifications before obtaining and considering information regarding the applicant's conviction history. It was authored by Assemblyman Roger Dickinson, D-Sacramento.

— AB1121 by Assembly Speaker Toni Atkins, D-San Diego, will help transgender people change their names by eliminating the requirement that people announce the name change in a newspaper before seeking a court order for it.

— SB652 by Sen. Mark DeSaulnier, D-Concord, requires property sellers to disclose to homebuyers all pre-litigation claims presented to the builder.