U.S. employers added just 142,000 jobs in August, snapping a six-month streak of hiring above 200,000 and posting the smallest gain in eight months. 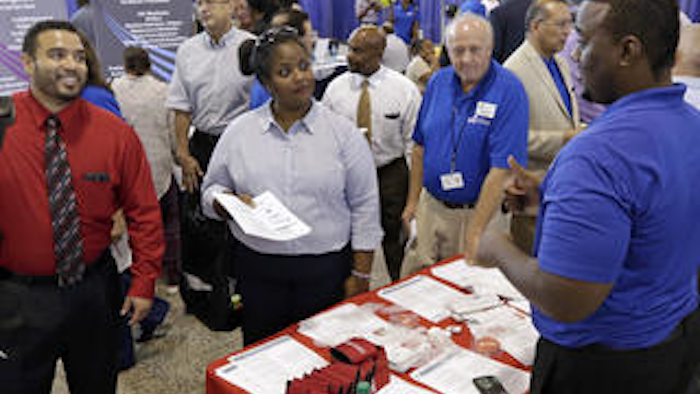 WASHINGTON — U.S. employers added just 142,000 jobs in August, snapping a six-month streak of hiring above 200,000 and posting the smallest gain in eight months.

The unemployment rate fell to 6.1 percent from 6.2 percent, the Labor Department said Friday. But the rate dropped because more people without jobs stopped looking for one and were no longer counted as unemployed.

Employers also added 28,000 fewer jobs in June and July than the government had previously estimated.

The weaker-than-expected figures make it unlikely that the Federal Reserve will speed up its timetable for raising interest rates. Most analysts expect the first rate hike around mid-2015.

August's job gains were far below the average monthly increase of 212,000 in the past 12 months. The slowdown was unexpected after most recent economic data had suggested that the economy was growing at a healthy pace.

Still, wage gains have been sluggish since the Great Recession ended in 2009, and consumers remain cautious. Consumer spending dipped in July, the first decline since January.

The biggest drops in hiring last month occurred in retail, which shed 8,400 jobs, after gaining 21,000 in July, and in manufacturing, where employment was flat, down from a gain of 28,000 in July. Transportation and warehousing added only 1,200 jobs, after adding 19,100 in July.

The figures "will inevitably spark speculation that the US recovery is somehow coming off the rails again," said Paul Ashworth, an economist at Capital Economics. "However, we're not too concerned by what is probably just an isolated blip."

Previous data released earlier this week had painted a picture of an improving economy and raised hopes that this year's strong hiring would continue. Services firms expanded in August at the fastest pace since 2008, according to a survey by the Institute for Supply Management, a trade group of purchasing managers. And factories expanded last month at the strongest rate in more than three years, the ISM found in a separate survey.

Americans are willing to spend on new cars: They bought 1.58 million in August, 5.4 percent more than a year earlier and the best August showing in 11 years.

In July, builders ramped up spending on construction projects by the most in more than two years, the government said this week. That is likely supporting economic growth in the July-September quarter.

And U.S. exports rose in July, narrowing the trade deficit. A smaller trade deficit can boost growth because it indicates that more of the goods and services that consumers and businesses buy were made in the United States.

Those reports suggested that the economy could grow at about a 3 percent annual pace in the second half of this year. That would mark a sharp improvement from the 1.1 percent annual rate in the first half.

But the slowdown in August hiring also signals that Americans may need to spend more to boost growth and ensure that hiring remains healthy in the months ahead.