Rising car and truck sales have prompted Ford Motor Co. to add a week of production at 13 North American factories so the company can make another 40,000 vehicles this year. 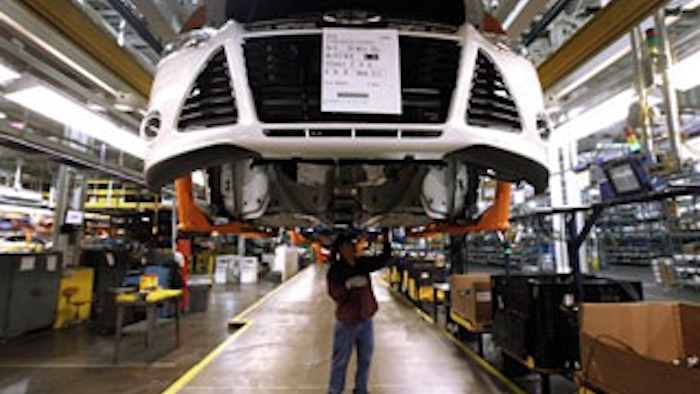 DETROIT (AP) — Rising car and truck sales have prompted Ford Motor Co. to add a week of production at 13 North American factories so the company can make another 40,000 vehicles this year.

Ford said Tuesday that it would cut in half the normal two-week summer shutdown at six assembly plants and seven engine and parts plants. Auto plants normally close for two weeks around the July 4 holiday as they switch over to make vehicles for the next model year.

Through April, U.S. auto sales ran at an annual rate of more than 14 million, substantially higher than last year's 12.8 million. Ford sales were up 5 percent. Total U.S. car and truck sales rose 10.3 percent through April to 4.65 million vehicles, according to Autodata Corp.

Many analysts are forecasting sales of about 15 million new vehicles in 2013.

At Ford, most factories have been running at capacity, and the company is adding third shifts at three plants just this month to meet higher demand, said Jim Tetreault, vice president of North American manufacturing for the company.

"Requiring more capacity from our plants is a good problem to have, and having the flexibility to add a week of production in our plants goes a long way toward solving it," Tetreault said in a statement.

Ford now has the capacity to make 2.6 million vehicles in North America, but the company plans to add shifts and make other changes to push that up to 3 million this year, spokeswoman Marcey Evans said. The 40,000 increase announced Tuesday is part of that plan, she said.

Ford is the second U.S. automaker to raise production this year by cutting summer downtime.

In the past two weeks, Chrysler announced that it would cancel the two-week summer shutdown at the Jefferson North plant in Detroit, Toledo Supplier Park in Toledo, Ohio, and at plants in Belvidere, Ill., and Toluca, Mexico. Chrysler also plans to take only one-week shutdowns at factories in Sterling Heights, Mich., and Saltillo, Mexico.