Ford To Get Blue Oval Back After Second Upgrade

Ford never stopped using its logo or factories, but posted them as collateral in 2006 in order to get a $23.5 billion loan and avoid bankruptcy. 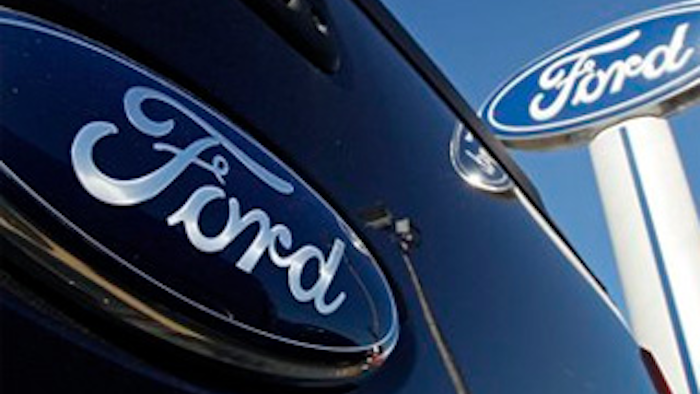 DETROIT (AP) — Ford Motor Co. is getting its blue oval logo back.

Moody's Investors Service raised Ford's debt ratings to investment-grade Tuesday for the first time in seven years. The upgrade means that all of Ford's U.S. assets, including factories, the blue oval and the trademarks for the F-150 pickup and Mustang sports car, are back in the company's hands and will no longer be used to secure the company's debt.

Ford never stopped using its logo or factories, but posted them as collateral in 2006 in order to get a $23.5 billion loan and avoid bankruptcy. Executive Chairman Bill Ford, the great grandson of company founder Henry Ford, said Tuesday that giving up the rights to the oval was "enormously emotional for me personally and for my family."

"This is one of the best days that I can remember," Bill Ford said in a conference call with reporters.

Ford needed investment-grade ratings from two of the three ratings agencies to get its assets back from a group of banks that held them. Fitch Ratings upgraded the company last month. Standard and Poor's has not yet upgraded Ford, and said in March that it didn't expect to change Ford's ratings within the next year.

Moody's said it believes Ford can maintain its investment grade rating even in the face of a European downturn or other challenges. The company has approximately $20 billion in cash, and it has been disciplined about cutting costs, controlling production and lowering spending on incentives, Moody's said.

"The key factor in our considering an investment grade rating for Ford was whether or not the company would be able to sustain its strong performance," said Bruce Clark, Moody's senior vice president. "We concluded that the improvements Ford has made are likely to be lasting."

An investment-grade rating signals that a company's debt has a low risk of default. Companies with investment grade credit ratings generally pay lower interest on debt. Ford also will have an easier time borrowing for projects like new plants in Asia. Moody's said increasing sales in China is one of the biggest challenges Ford faces.

Moody's also affirmed General Motors Co.'s credit rating of Ba1, one notch below investment grade, on Tuesday. Moody's said GM remains on track to return to investment grade within the next year.

Ford lost its investment grade status in 2005 when it was racking up billions in losses as the SUV boom went bust. The company decided that a massive restructuring loan was worth risking its logo. The influx of cash helped Ford to revamp its cars and trucks and — unlike rivals GM and Chrysler Group — avoid bankruptcy protection.

Ford began its turnaround in 2006 when Bill Ford fired himself as CEO and hired Alan Mulally from aviation giant Boeing. The automaker used the billions it borrowed — which Mulally often calls a "giant home improvement loan" — to close plants, shed brands and cut its global workforce by one-third.

Ford has paid back much of that debt. The company had $13.7 billion in debt at the end of the first quarter and expects to lower that to $10 billion by 2015. In March, it resumed paying a dividend, which it hadn't done since September 2006.

Mulally, 66, said Tuesday that the return to investment grade is "way up there on the highlight film" in terms of his accomplishments at Ford. But he said it won't speed up his timetable for retiring. Mulally hasn't said when he plans to retire.

"It changes none of my plans to continue to serve this great corporation," he said.

Bill Ford said he announced the upgrade on the company's public address system. Employees then formed a giant oval on the lawn of the company's Dearborn, Mich., headquarters.

Ford's former chief financial officer, Lewis Booth, said just before his retirement in April that getting the blue oval back would have an "enormous" psychological impact on the company after its wrenching turnaround.

"For every person who works at Ford, anywhere in the world, that's a very precious thing," he said.

The logo, which is recognized worldwide and appears on everything from baseball caps to scented candles, dates to 1965. Ford began replacing black and white ovals with blue ones that year, according to Ford corporate historian Bob Kreipke. The script in the center of the logo goes back even further. Harold Wills, a friend of company founder Henry Ford and a draftsman who helped design the first Model T, created the Ford script in 1912 using his grandfather's stencil set.

Ford hasn't placed a value on the logo. But Interbrand, which tracks brand values, said the Ford brand is worth $7.5 billion, and it ranked Ford 50th out of its top 100 brands in a recent survey.