Steelmaker RG Steel LLC filed for Chapter 11 bankruptcy protection in Delaware on Thursday, a week after announcing it would idle factories in three states and lay off thousands of employees. 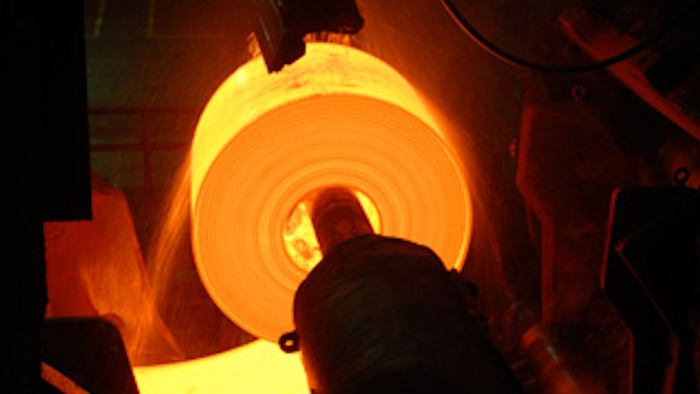 DOVER, Del. (AP) — Steelmaker RG Steel LLC filed for Chapter 11 bankruptcy protection in Delaware on Thursday, a week after announcing it would idle factories in three states and lay off thousands of employees.

RG Steel, the nation's fourth-largest flat-rolled steel producer with about 4,000 full-time workers and annual production capacity of more than 8 million tons, was formed in March 2011 as a wholly owned subsidiary of the privately held Renco Group.

The company, based in Sparrows Point, Md., said in its filing that it has more than $1 billion in assets and $1 billion in liabilities and wants "breathing room" to pursue a sale.

It's unclear how entering bankruptcy protection will affect RG Steel's plan to lay off employees, almost 90 percent of whom are covered under a collective bargaining agreement with the United Steelworkers that expires in September 2014.

RG Steel said in court papers that its steelmaking operations are most attractive to potential purchasers as a going concern, and that a restructuring would be best for all parties, including its employees.

It said it nevertheless sent layoff notices to certain employees because of the uncertainty in the bankruptcy process and an obligation to notify workers in advance of job cuts.

Maryland labor officials said last week that the company said layoffs would occur over two weeks beginning Monday and run through June 18 at Sparrows Point. The Maryland Department of Labor said 1,975 employees would be affected — 1,714 hourly and 261 salaried. It was not immediately clear how many workers at plants in Ohio and West Virginia could get the notices.

RG Steel said it began having substantial liquidity problems last year as steel prices sank while raw material prices remained at peak levels. Steelmakers have been hammered by both the debt crisis gripping Europe and the economic slowdown in China.

Shares across the sector fell and the S&P Steel index tumbled more than 4 percent by midday Thursday.

The company listed Severstal US Holdings II Inc., based in Dearborn, Mich., as its single largest unsecured creditor, with a claim of $36.5 million. Other unsecured claims include $22.4 million by Mountain State Carbon LLC of Follansbee, West Va., and $15.7 million by Ballie Steel PLC of London, England.

RG Steel said it has received default notices from vendors and was sued in West Virginia by Mountain State Carbon, a key supplier, and SNA Carbon LLC, a Severstal affiliate. A status conference in the lawsuit, which sought a restraining order to prevent the shipment of coke to an RG Steel facility in Wheeling, was scheduled for Thursday.

"Despite the company's aggressive cost-reduction efforts, significant improvements in its cost structure and substantial investment capital, the company has been unable to overcome the impact of the continued deterioration of the market and the inability of the industry to sustain a meaningful recovery," CEO John Goodwin said in a prepared statement.

Former Chief Financial Officer Richard Caruso said in a bankruptcy affidavit that RG Steel has not received a lead, or "stalking horse," bid for its assets but is confident it can negotiate a sale of some or all of them.

Renco is a family-owned, private holding company founded in 1975 with eight companies operating in North and South America, eastern and western Europe, Asia and Africa.